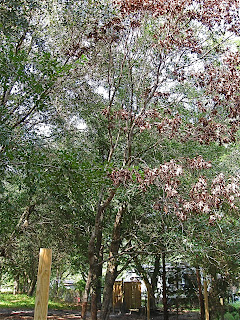 Something is attacking the trees in our goat pen. There is one casualty already and most of the other trees in this enclosure are suffering from some strange, mysterious malady that appears to be manifesting itself as a reddish bark coloration. I hadn't even noticed anything out of the ordinary till today when I was returning the goats to their pen and noticed that the leaves of one small oak had all turned brown, like in DEAD! I went in to examine the tree closer and noticed a ring ofa onblur 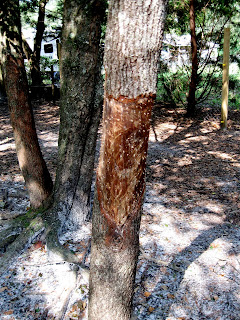 bark missing with tiny little fungus-like threads springing out of the naked surface. I can't tell if the missing bark was caused by Billy (the only one big enough to reach that far up) or from the disease. This is really odd and distressing. If anyone is at all familiar with what might be affecting my oaks in this one area, I would be appreciative of any info. I would like to mention that the Hold has experienced more rain on a daily basis this summer than in any previous period since this plot was settled, if that might have anything to do with it.

Today I braved the sun and humidity and ventured up on the roof, blowing off the limbs, twigs and leaves and cleaning out the gutters. While up there, I decided to get a pictorial of what the Hold looks like from above. It's an interesting perspective. 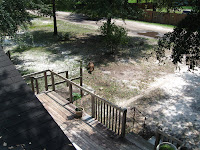 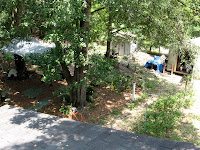 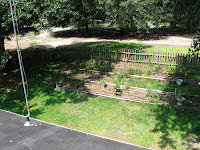 The Resident Offspring left to go visit her beau in Macon, so THE Wife and I have the Hold to ourselves for the weekend at least. When the cats' away..........hehe

Me, I have to work the weekend, then on the Second of the month I take another stab getting my eye fixed, only this time with the help of some chemical distraction. Frankly, I would rather they just knock my ass out cold, like was done for my colonoscopy, but these people always want to use the least conciousness-altering method possible. Hey, I'm from the sixties, give me a break! GO FOR IT!

So McCain picked a woman for V.P. Big deal. That's supposed to make HIM more attractive? I don't think so. Hillary had the credentials; this chick is........let's just say I don't want to hear any more B.S. about who has enough experience to lead this nation. C'mon, McCain could drop dead as soon as he takes the oath; we want someone, regardless of gender, that no one ever HEARD of to take on Vladamir Putin? At least we've had years now to get to know Barack Obama. McCain's pick of this woman is the worst kind of pandering I ever saw. I guess he cynically wants to give all those women who were so pissed off that Hillary didn't get the nomination a bone to chew on. Any woman who would bite THAT hook is just flat clueless to begin with and would vote for Hannibal Lector just for spite.

I've waited long enough. I want an affordable electric or hybrid car. I don't want to spend any more of MY money on imported oil. I want one of those new jobs that green tech can create if we just got off our asses and started building the new alternative energy infrastructure with the help of our government. I'm tired of tax breaks going to oil companies just so they can suck my wallet dry with high gas and energy prices. I'm tired of paying my hard earned taxes just to see them shoveled into the greedy pockets of corporate interests. I'm tired of my country's good name and reputation being dragged through the mud by a clique of wealthy neocons who've hoodwinked everybody, even their own conservative base. And I want MY damn social security to be there when I get to old to keep my present job and have to greet customers at Walmart, not have it all pissed away by wall street and the stock market. Don't give me that "historic performance over time" B.S., that doesn't help me one bit if the market goes to hell with my money the day I have to retire. And I've waited long enough for this country to finally have the balls to elect someone other than a fat, wealthy, old as shit white guy. Like our founding fathers said, " ALL men were created equal"!

By the way, have any of you ever wondered exactly what I mean when I refer to my habitat as Pendragon "HOLD"? If so, then wonder on over to the sidebar>>>>>and there you will find a Wiki definition of what I mean by HOLD. Not that I even have ROOM for any large winged lizards, but I have an affinity for what the concept embraces. I hope you enjoy the new feature. My thanks to Anne McCaffrey and her vision of a wonderful, challenging world.

Damn, Michael, you don't want much.

The India made car, the TaTa, looks to be a possible good bet. They should be selling them here in a year.

McCain's running mate - that's has the potential to be an absolutely brilliant move. She has a lot to offer the ticket and she is far from being a dummy or an empty suit.

Who are McCain and Obama?

Well put, Michael! Though I'd never underestimate the stupidity of some Americans nor the vicious - rabid even - tenacity of McCain's new "bitch". Judgment seems to be part of McCain's cuts along with taxes for the wealthy - I only hope that those being targeted with his VeeP Choice (normally outside of the right-wing) do see it for what it is - Pandering of the pathetic kind.

McCain's choice for VP is now proud of how her 17 year old pregnant daughter is choosing to keep her baby. Choice? In that family? I doubt it.

Look up Oak Wilt and if nothing else call on the folks at your local county extension so someone can come out to take a look...

Thanks for the views of the Hold!

Never saw any tree damage like that in my life. Hope you get to the bottom of it.

You probably won't hear from me for awhile. I don't know how long it'll be before they let me sit at a computer again. But, having lived half my life without computers, I'm prepared for the vaycay.