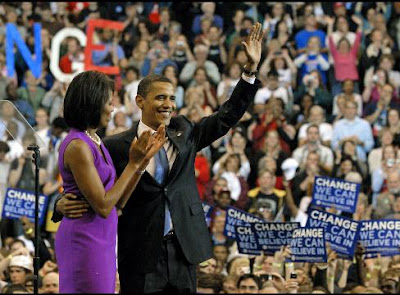 I made a point tonight to watch Barack Obama's acceptance speech for the Democratic Nomination for President of the United States. I wanted to be there, as I have for the last five-odd decades, for history. Oh, well, history is what it is, I suppose.

He is a great orator, this young man who just happens to be of mixed race. And, as best I can judge, he truly will make a great president. I know he would make a much better president that that old white guy whose greatest claim to fame is having been shot down in Vietnam and having to spend the rest of it in the Hanoi Hilton. I have as much respect as is due Mr McCain for his patriotism and ability to make promises as a politician. And I swear I will quit this country once and for all if another "majority" of it's citizens think that John McCain represents what this country is really about.

However, as far as history goes, I have heard many a historic and awe-inspiring speech, such as those given by Robert Kennedy, Jimmy Carter, and Bill Clinton. I have seen the strides made and the damage done by a parade of politicians who made promises they either exceeded or failed utterly to honor. I have gone from rabidly proud American, to a seemingly ex-patriot who wondered where his country went. But in all these years living in this nation, I have always been honest enough to know that we had shortcomings, some of them severe, that needed attending to, and all I asked of any man seeking my vote is that they be equally honest, and not feed me a line of BS I knew wasn't going to address those problems that threatened my livelihood or my freedom, or made my country a target of shame and ridicule elsewhere in this world.

John McCain, despite all his flip-flop observations that bear no resemblance to reality or his tepid solutions that solve nothing but the protection of the status of the status quo, wants to drag this country through four more years of the same insanity that threatens to make this a two-class society, one of haves, and those that serve them. The man used to have a mind of his own, but in the perfect mirror of Faustian sell-out, he sold his soul lock, stock and barrel to the far right wing mindset just to get the nomination of a party that has a proven pedigree of ownership by right wing christianity and corporate interests.

Barack's speech was good, it gave me some flavor of what to expect from him, but it did not rock me to the core as I hoped it would. I guess I was expecting too much from the man, who has had to wade through all the classic discriminations this country could throw at him without carrying the cynical baggage that you would expect him too. And regardless of employing a style that could not quite inspire as powerfully as Bill Clinton did, he still won my trust and most likely my vote come November. The worst that could happen should he falter in his campaign would be that I switch my vote, as hopeless as such a gesture would be, to Ralph Nader, but I will NEVER tell a conservative that their backward vision of democracy makes any sense by lending such a bankrupt philosophy my vote.

And for those of you who in your huffy hurt pissed off demeanor want to get revenge by switching your vote from Hillary Clinton to John McCain, I just have one question........why in the HELL did you vote for Hillary to begin with? Are you fucking INSANE? If you can't get over your petty self and vote for the democratic nominee, or some other independent, at least do us all a favor and get out of politics altogether, for you have proven you totally lack critical thinking skills, and that flash is all you understand. Really...........grow UP!

That's my insignificant opinion on this day in history, such that it is.

I'm hoping Obama comes out on top, but it is going to be a race. McCain did a lot of flip flopping while he was getting his facade together, but the man does have some credentials that go beyond the POW card he keeps playing.

Even though I am a Canuck I watched it because it was History in the making. I kept thinking WOW is this really happening? Is the USA, the great bi-polar boyscout playin' piano in the whorehouse, really ready to join the 21st Century?

Obama is the guy, and I have never doubted it. The generational gap betweeen him and McCain is so obvious and it is a microcosm of the countries demographic disparity. The younger Half is ready..the Dinosaurs and their status quo don't want to give up the ghost just yet.

Obama's speech was brilliant and bang on...he didn't fly into the rhetoricsphere, he said what needed to be said and let's face it, the camera LOVES him. The pageantry of American politics is so amazing..we're having a Fall election and we'll get a 30 day notice and done..you guys have already been at it for 3 years!

Now I'm crossing my fingers and hoping that nothing happens to that man...there are a lot of racist cracker whackjobs eager to get in the History books with Boothe, Oswald, and Sirhan...

it will be close like the Nixon Kennedy race, but this guy might just pull it off.

So Barack's lack of experience doesn't matter anymore and this is obviously a grab for all of those disgruntled Hillary Beeyotchs who want a woman no matter what DAMNIT!

Since McCain could die any second I think that the thought of a Hockey Mom President will cause a lot of sphincters to pucker and make the charismatic Obama and the exhuastively long winded Biden team look stronger..but hey, what do I know?

How come the Rebuplicans haven't tried to slip in the obvious
Osama/Obama Bin Laden/Biden connection yet..
oh yeah Karl f*cking Rove is gone!