This morning I awoke to the sensation of having a small nail driven into my skull right above my right eye socket. It seems it was bored with the "exploding head" trick and wanted to try something different. So, I got up and attacked it with a couple of generic ibuprophen/decongestant tablets. That tamped it down some for the rest of the morning while I got under the hood of the Focus and finished changing out the spark plugs and installed the rest of the new wires. Once that was done, I rounded up all my tools, actually accounting for all of them, and started her up, my fingers crossed. WOW! She responded like an old man on viagra AND steroids! Smooth and powerful and not one hint of hesitation! Am I good or WHAT? I guess a new set of plugs WAS overdue after all.

Then I went out back to release the goats from goat prison, only to find that Billy wasn't all that interested in escaping. This is the goat that paces back and forth waiting for the gate to open, that drags me across the yard while I pretend I am actually steering him in the direction I want him to go. Poor Billy just wasn't feeling all that frisky. So I interrogated THE Wife, who had fed the goats yesterday while I was under the weather myself, and she mentioned that the neighbors HAD fed them some bread, something they like to do now and then. The twins didn't appear to be any worse the wear for it, but they DID seem to me to be awful inflated for it being the next day and plenty time to chew their cuds overnight. I can only hope that the poor guy is simply suffering some intestinal discomfort and will get over it soon. I really am in no mood to lose another animal, especially after that animal had been fed by strangers. One might start imagining all sorts of things.

Later, as noon approached, it was apparent that the sinus headache was going to give me a run for my money, so I said the hell with it and hit it with another Maxalt. That did the trick and my head finally cleared. The pain hasn't returned and I feel MUCH better. Damn good thing, too, cause I have to get back to work tomorrow. The eye is also healing nicely, with far less irritation that is usual. Guess I won't turn into a one-eyed Jack after all.....at least not yet! 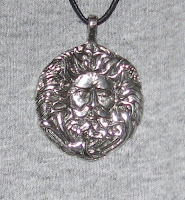 After lunch, I HAD to take the two witches to the local pagan paraphernalia store, so they could stock up on more herbs and stones and other things Wiccans can't seem to function without. I decided to go ahead and get myself this pewter Green Man pendent I'd been lusting after for awhile. Some people collect porcelain elephants, or teacup poodles; I collect anything Green Man. Or dragons. One can never have to many dragons, especially in a HOLD.

So, after a few very trying days here at THE Hold, things appear to be getting back to......I dunno.....what's considered "normal", especially around HERE?

The sharing of a life is a good thing.

Grab your tools. I need to change a timing belt and could use some help.

Sorry about the headache - they bite.

They will pry my Maxalt from my cold dead hands. How did I ever survive without it?

I hope Billy Goat gets over his tummy troubles. But those neighbors? Need a come to jesus meetin'

ooohy and that greenman? Hate to burst your bubble but he has a very cool history. He is actually the sun I think. His visage is on the wall at the ancient roman baths in Bath England. He's uber cool and reigns there with the Goddess Sulis.

They call that visage a gorgon but I believe it's the sun. There are no snakes heads, no fangs, and it appears to be very male, not female. Gorgons are female. Cowens, what do they know.

Sorry to break it into three comments...