A Day at the Snail Races

I'm watching World News Tonight with Charlie Gibson as they describe the continuing drama on Capital Hill between Democrats, Republicans, and that dude who's been living in the White House.......

I'm watching Americans actually getting bent out of shape, upset enough to actually picket in the streets, concerning the idea that Wall Street, or more narrowly the fat-cat CEO's and good-old-boys, will be getting a bail-out that your average joe blow has never gotten. This isn't exactly what the government (the Democrats, at least) is trying to do, but that's what your average react- viscerally- and- ask- questions -later- American dumb-ass citizen believes is going on. 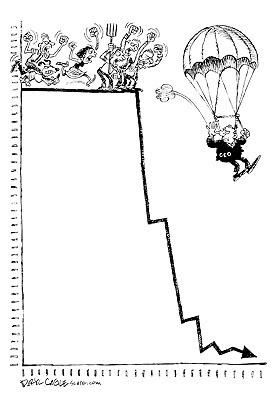 The Dems really are trying to instill requirements that CEO's do NOT get their golden parachutes for fucking it all up, and that Americans holding designed-to-fail mortgages can get some sort of renegotiation into mortgages that make sense. Yes, many of these people overloaded their asses with ARM's they should have known were going to come back and bite them, but you and I both know that most of these people are unsophisticated, hard working, down-on-their-luck people who just wanted to own their own homes and were talked into mortgages that were designed to do one thing and one thing only...make money for greedy bankers.

Our mortgage you could describe as sub-prime. Thanks to our income and credit rating, we "earned" a thirty year fixed mortgage at 11%, which is almost twice what the best rates would provide. Yet, we pay it, because that was what we could get, and we were rapidly headed towards paying that monthly amount for the privilege of living in apartments, which we were getting real tired of, moving each year to stay ahead of hefty rent increases. I could easily have fallen victim to one of these scams which would have cost us our home, but I stayed out of it, never seeing an offer that didn't seem too good to be true.

We still have our home and we intend to keep it, save loss of our jobs or some other disaster, which thanks to this Wall Street debacle could very well be right around the corner.

How did America get in this pickle? How do you think? They say hindsight is twenty-twenty, but I say that thieves know they are stealing when they are stealing it. Republicans call this "free market", and I call it Predatory lending practices. Even in this day and age, people trust, or blind themselves to hard truths, and thus you have what we now have. Those in power saw ALL of this happening AS it was happening and did nothing to control it. So, remember, you deserve the government you elect. I suggest you all wake up and pay attention to that fact for once when you go to the polls in November.

Maybe four years from now, when I am sufficiently old and addled, I will run for president, providing you with the most honest campaign you have ever witnessed,which will, of course, result in my getting nowhere. Yep, I'll tell it like it is, and offer common sense approaches to governance, which will only earn me enemies amongst special interests and special attention by the National Enquirer if I happen to get lucky and score a 13% share, but hey, when you get to be my age, what have you got to lose? All the dirt on me will come out, and liberals and conservatives alike will attack me for being a "Godless" pagan who will sacrifice babies in the Oval Office, but not one of the candidates running against me will stand on an issue. I'll chew them up and spit them out in that regard. But, it won't matter, because we have proven that Americans thrive on flash, and can't abide substance, because substance means less opulence, and Americans hate to be told they can't have more than they deserve. Nope, sadly, I could never be president because I would DARE slap an American's hand and say NO!

So, instead, I will live out my meager and unnoticed life here at the Hold, this mythical wonderland where there be dragons, fairies, and the occasional fire-beetle on a balmy late summer night. My destiny is not to be the next Napoleon, the short man who dares to stand tall. I am not connected, I am not the member of the church in favor, and I do not belong to the redneck, born again clique which now holds power and will kill us all if we do not put them down for good. Nope, I will remain, as always, that voice in the wilderness, or what's left of it.

Which isn't such a bad fate, all told. I'm married to a Witch. What more could a small, rational, spiritually challenged yet hopelessly romantic man ask for?

Since I don't have anything resembling clever to say, you'll have to settle for this.

Wait a minute. It's all good. Dr. Who and Torchwood are both running new shows.

Did I just read a rant written by the man who vowed never to write another rant?

Thy did indeed know they were stelaing. But I think there has been so little consequence for the rich to screw people over, that they didn't care that they were stealing.