While the media keeps up it's hysterical drama concerning Gustav (c'mon, folks, this is your average, run-of-the-mill hurricane that just HAPPENS to be coming ashore near New Orleans, not another 'MONSTER/KILLER STORM PROMISING DEATH AND DESTRUCTION LIKE NEVER BEFORE SEEN!!!!"), news has quietly leaked out that governor what's-her-name has a seventeen year old daughter who is already knocked up. They assure us the lucky couple will be married. Now, folks, I don't know about you, but I am so relieved to see that the G.O.P. will be bringing us even more examples of "family values" to try and emulate. Let's hope that the young man who got him some from the wrong little girl takes the veiled threats seriously about his responsibilities and doesn't take off with hopes for asylum in Canada. That would be somewhat embarrassing, now wouldn't it? 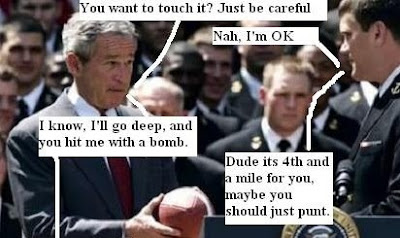 Also, I think we all need to smile knowing that our future Commander-in-Chieftess knows her way around a firearm. It's important that a president and leader of the most powerful military on Earth (unless the Russians decide to throw caution to the wind and test that assumption) knows how to carry a football. Not THAT kind of football, silly; the briefcase she's gonna have to carry around with the big red button in it......you know, the one that for all practical purposes ends the world faster than it already will be. Why do I talk as though she's already President? How much longer do you think McCain is going to last, especially if a Democratic congress pisses him off and his blood pressure goes sky high?

Now, we could forgo ALL this speculation from the get-go by doing the sane thing to begin with and elect a sane person to office, and get to work repairing the damage done this nation during eight years of rape and pillage by the neocons. I say "could" because the American People have already proven just how illogical they can be when it comes to choosing leadership. The Russian people HAVE an excuse; their history is nothing but disfunction; they honestly don't know how else to act. We are better than that........or used to be.

Oh, and yes, allow me to admit up front that yes, what's-her-name has more "executive" experience than all three of the other candidates combined, that is, she was the head of a state militia (what we call the "national guard", most of which are to busy over in Iraq to guard us here back home) that, thankfully, can pretty much run itself, and that she hasn't been suspected of any corruption. Then again, George Bush was a governor too. That is so reassuring. isn't it?

Now Barack is faced with the same dilemma that most young people are faced with as they go into the labor market and try and get credit. They are told they can't get any because they don't already HAVE any. That's right folks, it makes as much sense now as it did when we were young and trying to make our way in the world......Barack can't be President because he hasn't already BEEN president! So, that leaves us with Jimmy Carter, the slightly smarter George Bush Sr, Bill Clinton, and DUBYA, except that he used up his two terms already. So, sorry John, but you have to step aside; you don't already HAVE presidential experience. Sorry, Barack, looks like Hillary gets back to the White House AFTER all! That is, if Bill can take down Jimmy.........

Aside from all these observations, I personally am losing much reason to care one way or another who wins what office, because no one has given me any reason lately to believe that mankind can clean up it's act before everything goes to hell in a hand basket, ecologically, politically, socially, etc. The planet is DYING, folks, or haven't you noticed? Have you seen any reports of any ecological disaster being REVERSED lately? The coastal dead zones are increasing, not decreasing. The arctic ice is melting faster than even the worst estimates approximated. Species extinction rates are up. Mankind is reproducing and destroying natural habitat at a record pace. Sorry, I like fluffy bunnies and hope and good news and feel-good stories and all that crap as much as the next person, but my foot is stuck in this railroad tie, a big bad-assed diesel train is bearing down on me, and the best anyone can tell me is that Jesus loves me. That makes me so fucking happy I could just puke.

Jeez, Michael. You don't make it easy for me. I'll be glad when all of this election bullshit is over and done with.

Re Palin - I like the fact she knows how to handle a weapon and I like that she has hunted. It doesn't make me agree with her politics in general or her stance on some basic issues.

When it comes right down to it, none of them make me feel all warm and fuzzy thinking about them as POTUS. I lean heavily toward Obama, but he has done a couple of things that seriously piss me off. One of them was voting for the extension of the Patriot Act. I don't much like his views on gun control either, but the recent SCOTUS ruling has caused me to relax - just a little.

I still believe politics should be civil and stick to issues, not personal attacks. Voting for the lesser of two evils still pisses me off.

Nothing much changes. I'm a fucking dinosaur.

You're not a dinosaur, my friend, just another average joe who got "left behind".

Ya both loveable chaps! (sometimes)

Please put me in the dinosaur catagory too. Voting for the lessor of the two evils pisses me off too!

I don't see Obama as the lesser of two evils. I'm enthusiastically behind him, and the McCain/Palin ticket scares the bejeebers out of me. Family values my ass.

Sometimes it's so frikking frightening it's almost impossible to soldier on. but soldier on we must. But Palin? OMG. Look in the dictionary under "twit" and there is her photo.