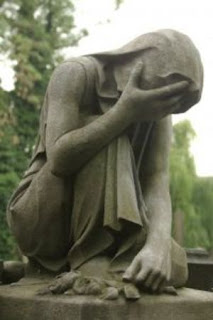 There were consequences to yesterday. This morning about 4 AM, I awoke sweating, feeling very strange. Having no idea what was happening, all kinds of possibilities went dancing thru my head, none of them good ones. The feeling of weirdness and discomfort, a sort of pressure in my skull, increased to the point I had to get up, and it became apparent that being upright relieved the symptoms to some small degree, and I decided to go into the living room until this episode passed. It didn't pass.

All of the wee hours of the morning I sat upright on the couch, my head not hurting exactly, as in a migraine or bad headache, just this sense of my skull being pressurized. Any attempt to lay my head down increased my discomfort to the point of feeling nauseous, and visions of stroke or brain aneurysm began to dance in my head. As sleepy as I was, I could not go back to sleep. Never was one to be able to fall asleep upright like some people can.

Long after dawn and headed towards noon I was one unhappy puppy, wondering what was happening to me but not at all willing to head to the emergency room and the all-day ordeal that would invite. I chanced some ibuprofen, then some Toridal, then finally a maxalt, the final say in taking down a migraine. The maxalt finally did the trick, even though my head was only now beginning to hurt like a headache. I gradually began to feel human again, and none of the signs or symptoms of stroke ever became apparent, other than the positional head pressure and nausea. The strange sweating did not return.

Later in the day that had been almost entirely wasted, we settled on a reasonable explanation for my malady. The previous day, as I have reported, was a long and trying one, and when I am engaged in a day-long affair of possible grave consequence, I tend to neglect such basics as drinking enough fluids to remain hydrated, and as hot and humid as it was, it's no wonder I lost something like five pounds, probably all water. On top of that, I think perhaps I had one rum and coke to many that night celebrating my relief for having pulled the automotive rabbit out of the hat, which only added to my dehydration. Plus, I am not the youthful ironclad hell raiser I once was. Demon rum bit me in the ass, but good.

But you know, aside from this one medical nightmare, I can report some progress in another area.........my eye, the one that has cost me about a weeks worth of sleep? The irritation has decreased remarkably today, which is timely, as I really have to return to work Monday.

And that's how I survived one scary day here at Pendragon Hold. I don't think I'll need any sleeping pills tonight.

Oh how scary for you! Head pain doesn't even allow meditation as a treatment - too hard to focus on anything. Glad you're feeling better and I hope that you keep that kind of pain at bay for a long time. Glad your eye is doing better also. Keep your chin up.

Probaly the rum that fixed ya irritation

Hope today, Sunday, is a winner for you. Sounds like you've had enough during the last two days.

I very bad about hydration. For me, the symptoms are almost immediate and often potentially serious. Gotta watch it, bro.

That's a horrible day! I'm glad it's over. Maybe you'll remember to stop and take care of the body next time stress hits.

Or maybe not. I've been there.