The Night Report, with Alex Pendragon

We're getting on towards night here at Pendragon Hold. We prepare to watch a movie as there is nothing of value to us on the boob tube. The new season is not fully upon us yet, thus we enjoy our freedom from slavery to new episodes of fiction, which is often more entertaining than fact. At least it's no where near as depressing.

The new downstream oxygen sensor was installed, the computer reset, and during the drive to retrieve the wife, the light came back on, but the engine continued to run smoothly, all the way home. I suspect when I get around to interrogating the computer once again, it will accuse yet one more component of having failed in it's duty, but for now the engine runs well regardless, and I can only pray to the Gods of Internal Combustion that it continues to do so. 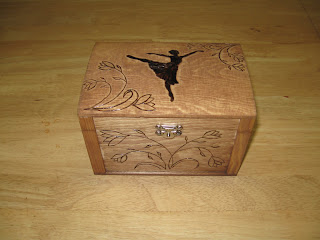 The Resident Twin has garnered an eager market for her wood-burned boxes, commanding much more in compensation for her efforts than I would have thought possible. I think the emotion, the wonder that permeates her work comes through loud and clear, thus demanding a desire for her work that is making me jealous that my Green Man box might take forever to get created, as it is a gift to me and not a bought item. I sometimes entertain the idea that this girl, this woman, actually, could actually find herself in the enviable position of being able to support herself with the labors of love that are also a talent in demand by those appreciative of this special sort of art.

I only received two responses to my fall from grace so far; my escape into the madness of emotion that a stupid movie launched me into, but both were actually supportive, as well as positive. It remains to be seen if the remainder of my small readership survived my outburst, but I cannot worry of it, for as I have stated for the record, I cannot stand and act as though I can tolerate the state of this nation as it now stands, for the oath I took did not save my country from it's enemies, and in it's failure, in MY failure, truth trumps pablum, and it is what it is. I rest uneasy within the borders of this place, helpless to do anything but survive in it's clutches, as though I was Cherokee or first generation Japanese during THE great conflict, but if anybody asks, I will gladly share stories of when hope was not a laughable condition, but an admirable one, and we all marched arm in arm to tell the truth to power. We don't do that kinda thing anymore..........

Michael, you can't fall from grace. That's rooted in the biblical tradition which you don't accept. It's like me telling someone to go to hell. I don't believe in hell so I can't tell them to go to a non-existant place, state or realm.

I like your rants.
But I would, being a ranter myself.
Love,
Terri in Joburg

And here was me thinking I had serious mental problems!

Your rant was right on. If I had not been in Vegas running my health and wellness into the ground I would have commented positively. I saw Sicko over a year ago and it made me feel sick.