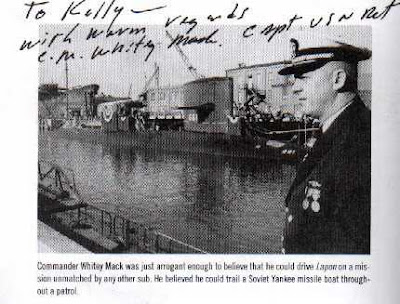 It is with heavy heart I report on the passing of Chester M. (Whitey) Mack, Captain, USN (Ret.). Knowing in advance the end was so near makes this announcement no less sad for me. No other person in my life impressed on me the worth of trust and the advantages gained by surrounding oneself with superior talents. In my mind I can think of no greater position of responsibility than that of ship captain. It is not that Whitey may have been the greatest captain of all time, or even of his time. But, Whitey took us into harms way and brought us back home. That was his task and he did it well.

Say a prayer tonight for the soul of Whitey Mack and for God's blessing on Joan and their children. "Oh hear us when we call to thee, for those in peril on the sea"


I recieved this e-mail from a former shipmate who served on board USS LAPON (SSN-661), a nuclear fast attack submarine made legendary in the "silent service", thanks to this man, Captain Whitey Mack, who commanded this fine boat a few years before I had the honor to serve aboard her. I never had the privelege to meet Capt. Mack, and I would not venture to suggest that the Captains I served under were made of the same steel as this man. Regardless, I feel the same loss as every crewmember of this submarine does, and I want to thank Capt. Mack for his service to our country. I can only hope that generations of warriors and politicians that follow do not shame this man's memory, as they threaten to do now.

When my first skipper heads south I will dance on his grave.