In the interests of being "fair and balanced", I want to correct a picture posting I made to my blog last post. I found a photo of Sarah (let's kill wolves) Palin in a bikini holding a gun (which is actually, on close inspection, an air gun) by a pool. Now, when I googled this picture, it never actually occurred to me it might be photoshopped, if only because it seems such a natural pose for Palin to be captured in. We ALL have pics like these we might soon as well have never had taken, but seem fun for the moment. 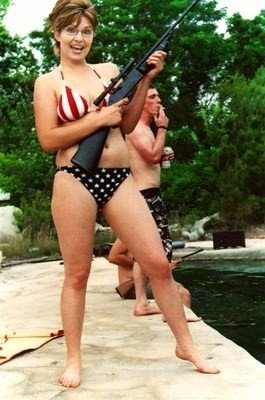 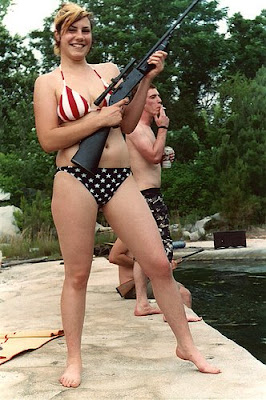 I really need to pay more attention when it comes to pics, because I really should have known damn well that this was a photoshopped pic. One of my readers asked, and so I double checked, and sure enough, someone claimed credit for the deception and even provided the original shot, which I pose here.

I'm not apologizing to Sarah Palin, as I think the photo is honest in how it depicts her mindset. But I AM apologizing to YOU, my readers, for being so lax in posting the pic without double checking it's authenticity and at least informing you of the parody. Thank you, Anne, for keeping me honest.

So, dear readers, I promise to try and at least notify you that a photo is fake if it really could be construed as being real. It fooled me at first glance but shouldn't have.

And I still think Sarah Palin is a bloodthirsty, bigoted redneck with an understandable vocabulary who is just dying to usher in the Rapture, because, after all, she loves all of us. Especially us witches.

Fair is always a good way to be.

I don't believe ANY photos anymore..remember the flag fluttering on the Moon (without air?) and the Lee Oswald gun photo with his head shadow going the wrong way...
who would do syuch a thing?

Seeing is believing for visual creatures like us so naturally it is the most powerful way to deceive.

Hey! Watch who you're calling a redneck there Michael!!! We down here in the South might just take exception to that.

i know how it feels.