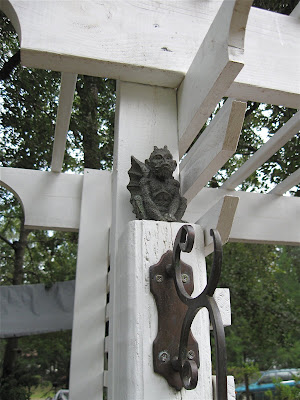 Welcome to the early Saturday edition of The Chronicles of Pendragon Hold, that acre of sand somewhere in the bible belt where men are attempting to wrap their empty heads around the concept of having their Commander-in-Chief barefoot and pregnant, if not in the kitchen.

Today is fairly busy as Saturdays go. The wife is soldiering on through some serious pain brought on by what might be a pinched nerve or bulging disk or both. She won't know for sure till Monday when she sees her Neuro-Shaman. I'm putting the finishing touches on cleaning the laminate floor, getting all the dishes washed, the clothes washed and dried, and whatever we need to do to get ready for our guests tonight. You see, we do all this because humans for some strange reason can't allow other humans to see what slobs they REALLY are when guests aren't around to see it. Well, actually, we keep the place pretty clean and halfway tidy, but THE Wife gets medieval on the dirt when company's coming.

I love the party shuffle jukebox feature on my iTunes. I hear stuff I forgot I had, it's been so long since it got played. The last songs played have been: 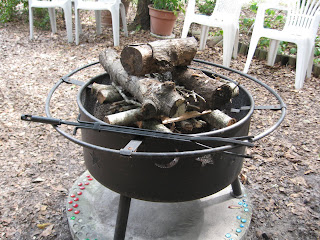 We'll be having a few of THE Wife's co-workers over tonight simply to sit out in the shade garden by a nice fire. The weather has been relatively nice, and this is the time of year you can go outside and not lose five pounds of water sweating.

Right now I am waiting for the mop-and-glow to dry so I can get the furniture back to it's proper places. I'll post again tonight if something sufficiently Earth-shattering occurs. Not that I expect the killer asteroid to arrive......

Damn! That is a pot load of domesticity.

That's a great looking braai you have there. (from the Afrikans 'grill') and hey you have the same horrible outdoors chairs we have!

I love Gaia Consort, and It'sTheEndOfTheWorldAsWeKnowIt is engraved indelibly on my brain.
I wonder how many other people started being conscious of a non-biblical apocalypse because of REM?

Sounds very relaxing, except for the mop and glow part.

Mop and glow is a miracle elixer that cleans AND shines...........is this the Truman Show?

Party Shuffle is my friend. I created a smart playlist that only plays songs that have never been played before... it continues to get smaller but that is a trip worth taking.

I have been absent too long... but I am baaaaaaack! Much love.

In a Gadda Da Vida ... grins - I STILl remember my ma saying "don't listne to them Sheenagh ... they are on DRUGS - they're TRYING to say In the Garden of Eden LOL...

I LOVE outdoor fires - we have an outdoor fireplace too in my secret garden and it is my place of respite and peace ... Irish coffees, a crackling fire, the trees above and good company .. can't be beat.

Hope your wife's back is better - nothing worse - I'm not sure what the exact issue is and whether it woudl help but yoga has done WONDERRS for all my aches and pains - including what USED to be a bad back.