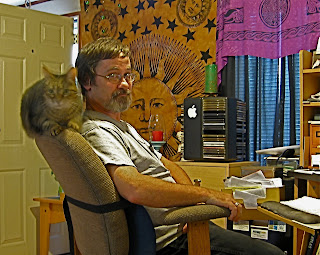 Welcome back to The Chronicles of Pendragon Hold. I am your host, Lord Alex Pendragon, Master Harper and Grand Administrator of this humble little acre of sand tucked away in the far corners of metropolitan North East Florida. May your visit be worth the bandwidth you burned through to get here.

This is day two of my usual three-day struggle to occupy my time between twin twelve hour shifts I am forced to work in order to fund my existence. To think that once I could have spent all that time working my maize crops or hunting wooly mammoths. Now I open cans of niblets and marinate chicken breasts, and somehow, it just doesn't seem to be as satisfying.

Today is one of our paydays, so I get to pay bills online and shop for groceries (hunt and gather) and try and figure out how far behind we have fallen this week. I hear that the entire world is on the brink of economic catastrophe, but what I would like to know is this: when HASN'T the whole fucking world been on the brink of financial catastrophe? World hunger and homelessness were alive and well last I heard. I can see it from here, no more than two paychecks away.

Somebody outright robbed my good friend (or so I claim) Donn of one of his posts, which reminds me of the citizen who did the same thing to every post my other good friend (again, I make claims), The Buffalo ever made, claiming them to be his own. People amaze me. It seems to me it takes alot more energy to steal someone's intellectual property than it does to just make something up yourself. I just create this shit on the fly myself, and people seem to be happy enough with it. Yes, I know, you gotta remember shit as it happens and describe it in so many words, but, c'mon, if you people can yack all day on cellphones while driving Ford Expeditions while putting on eyeliner and lipstick, you can write something for your own blog without stealing it from somebody else. You can't? Well, fine then, go kill yourself. Before someone else does.

Another friend of mine (I know, I seem to have alot of friends, don't I?) on the other side of the world made the mistake of climbing on a motor bike with an attitude not compatible with respect for fine machinery. She was taught a lesson in humility, which I attempted to warn her would happen. My lesson came a little late, as it seems my ability to send psychic messages straight to someone, bypassing their comment section altogether, is on the fritz. I apologize for that. However, I am proud to report that I did not stoop to telling her I told her so, as some other miscreant would have done. Nope, folks, I am above gleefully lording it over some one when my humble and wise counsel is not heeded. Nope, not me.............

I have this strange feeling overcoming me that someone very much wants to bitch-slap me about right now......now....who would want to do such a thing?

OK, I just shut that travesty off and cranked up iTunes shuffle.....which is playing me "Night Flight" by Led Zeppelin. Sanity has been restored to my universe......

I took THE Wife to our biweekly lunch at Panera's, where we shared a two-fer, her getting the harvest salad, me the corn chowder soup. Damn good stuff for less than ten bucks. I remember when ten bucks got you a whole bag of groceries. I know, that was back in the Paleolithic...........

Thus ends another exciting episode of The Chronicles of Pendragon Hold, that little acre of sand located somewhere between Tim, Buc, and Two. May your own personal bail out checks arrive in time, and may your return visit to our humble blog always be as exciting as it was this time. Where else would you see a man being subjected to Christmas music this early in the year?

The thief will likely never have an original idea. I will always have another.

Hey! Is all that I see on your head hair? Wow, that grew back fast. And...who's your companion? Is that a wall hanging, or a painting by the door?

Full of it, I know. You getting rain today? We haven't had any for weeks!

Jules, I will let it grow until I have enough to give to locks of love, then I will shave it to the skin and start all over again. I am WAAAAAY beyond barbers now. My companion in the picture is Cricket, our adopted cat who thinks for some strange reason that I am a cat person, which I am not. And, what you ask about is a wall hanging. My personal alter is in front of it closer to the floor. And no, no rain today, but we had some yesterday and the day before.

I'm so sick of commercialmass and anything, including music, connected with it. They will soon be putting out the christmas stuff right after the 4th of July, they depend so much on x-mas commerce.

It's using the "son-of-god" to sell and that makes me want to puke.

I HATE thieves....one blog I had at one point was hacked and that was stressful as hell.

I LOVE Christmas music- but only AFTER the Santa Clause parade here in Toronto, which is pretty well around the same time as American Thanksgiving.

We have had Xmas crap on the shelves for at LEAST a month now - it is obsecene.

Now that I have got my dose of the news from Pendragon Hold... I feel so much better... wait... is that Xmas music I just heard... noooooooo!

OK... the cute animal in the picture makes it all better. The kitty is cute too! :)