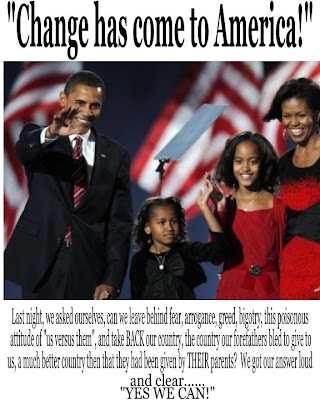 Even up till the end, I had my doubts. After eight years of America demonstrating to the world just how low it could be brought down, I began to question my fellow citizens capacity to make sane, rational choices. Yet, in retrospect, I have to give a certain twisted credit to the worst president this country has ever had. Without you, George "DUBYA" Bush, we might not have been brought to a point in our history where we where finally and fully capable of electing a black man to the highest office of our land. Without you, the Amercan people might not have been pushed and prodded and challenged to recognize who, between an old, tired, and devisive White Man, and a fresh, honest, and inspirational man of color who represented the true nature of what America truly stood for, who our choice HAD to be. Without you, George, we might not have been able to look within ourselves and know for once that a major change of attitude HAD to occur.

And thanks to YOU, Mr. Obama, I finally feel that YES, I have my country back. THANK YOU!

And just who is Barack Obama?

I'm past the crying stage..now I'm in the shit eating grin and giggling like a 9 year old stage...

Who'd have thought we'd actually have something to thank that moron, W, for after 8 years of misery and shame?