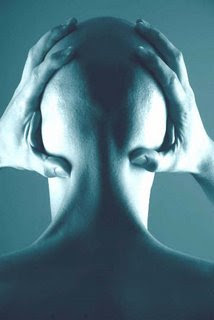 OK, so we go to the neurosurgeon expecting this guy to describe all the reconstruction he was going to have to do to fix THE Wife's pain, only he says that after looking at the mylogram, he has come to the conclusion that none of the nerves have been impinged upon, thus there is nothing surgically he can do to relieve her pain. So, the wife escapes a major surgery, with all it's attendant risks and effect on our financial stability.

She still has the pain.

Sigh, this just seems to go on and on with no end in sight. She turns to me and plaintively insists, "But I'm NOT crazy, this pain is REAL..." and I have never found a reason to doubt her. You KNOW when your loved one is hurting. So, as much as I am relieved that they won't be slicing into my wife's neck, I still am frustrated that no one seems able to pinpoint the exact CAUSE of her pain. I'm beginning to suspect that it's not in the medical establishments best interest to EVER fix her, not with all the office visits and pain pills they can sell her.

So far there have been no noises at my hospital about cutbacks or layoffs. I suppose as the economy continues to tank, the stress is manifesting itself by increasing admissions to the ER, and our upper decks are always full these days. We even admitted one of our own aids to the unit, which shows that even we are not immune to the stress of living in this tough reality. What really pisses me off is all the noise the Republicans are making about not wanting to bail out the big three American Automakers, seemingly blasé' about what that means to the jobs of millions of middle class Americans. Yes, I know that we need to smack some big-wigs upside the head for the kinds of autos they have been manufacturing when we've long needed to compete against the foreign car makers in the area of new hybrid technology and cheaper, well made cars, but that's no reason to punish the line worker who had no say in these decisions. And, ENOUGH about "it's all the Union's fault", when you know damn well that these "evil" unions are responsible for what little rights our workers have left in this country, and I for one and not going to begrudge them making a damn good wage when our average CEO is dragging down MILLIONS in salary for.........what? Fucking up our entire industry?

Now is the PERFECT time to give these executives pink slips, without the golden parachutes, and FORCE the companies to retool their lines to start building high mileage cars. AND, if we could just bring about universal health care and remove this burden from business, maybe THEN we could compete on a more level playing field with our overseas competition. AND, perhaps now is the time to examine exactly what the American dream really is. I would say that having a half-way decent roof of my own over my head, a good set of wheels without all the bling and cup holders, and adequate food is a real good start. And having this without destroying the world around me would really be nice. Perhaps we could define a successful company as one that employs the most workers while producing a good product without sending a few lucky individuals to luxury resorts at our expense, instead of the one that works the fewest people the hardest while lining the pockets of rich bosses who do nothing but suck the life out of everything around them.

Another words, can we for once stop bending over?

Blessed be, and may this post find you safe and employed.

I was told the same thing about my neck (and lower back). Just because they won't do anything doesn't mean the pain is not real. I feel for THE wife, I really do.

The rest - yep. We're in for a rocky road and I can point plenty of fingers. Unfortunately those that I point at are the ones holding all the cash thus making their POV count more than mine. It's the American way.

It is hard on you and your wife. Nerve pain can be intense and the source can seemingly defy doctors.

Gotta tell you, I'm not in favor of the Big 3 bailout. Not the way it stands now. They need to present a viable plan and there has to be controls to make sure they don't stray from the path. Labor needs to make some concessions also.

I wish that there was something to relieve her pain but I know that a lot of surgery is pretty iffy so maybe this is a blessing in disguise. I sure hope that an answer happens soon.

The big three intercoursed themselves. Seriously yesterday the CEO of GM wasted $20,000 by taking took the corporate jet to washington to beg for bailout moolah HELLO!
Executive compensation is indescribably out of whack..and these guys actually think that they are worth that kind of money? Huge problem for America.

And why make 18 kinds of Chevys? Make 2 great models..honestly. Bothe the execs and the workers should be prepared to go back for less money after all three restructure in Chapter 11.
Let them go..it seems to be the only way that these companies will be able to make wholesale changes...they've been operating in lala-land for decades and need a good hard swift kick in the knackers..and soon just get it over with so that they can become competitive again.

Ahh yes nerve pain, I know him well, all through my right arm. Remain positive and hopefully all will be good in the end.
Well I scored well, I am safe and employed........For now!

I wouldn't assume that they are saying your wife's pain isn't real, just that a surgical fix isn't going to work. Sometimes, there really isn't anything they can do. Doesn't make it easy news to hear, though, and I'm sorry you guys are going through this.

The last full paragraph pretty much sums up my view.

I'm sure you have explored all avenues ... but things like pilates and yoga, believe it or not - can do a lot for those kinds of pain -have you guys looked into those options?

yeah, flying to Washington in their PRIVATE jets ... smart, eh? Just so in your face, we're rich smug bastards aren't we?

I'm safe, but work is hard to come by. Candles for THE wife, I have a little nerve pain, just enough to know what a lot could feel like.

I suffer from fibromylgia myself. Oh, the years of trying to figure out what was wrong with me. Why I had so much pain and no obvious reason for it. I've been stuck and prodded and tested and been a drug guinea pig. The diagnosis was both a blessing and a curse.

That said, once I began treatment for it things got better.

All my best, hang in there. She's not crazy.