Another Day of Another Week 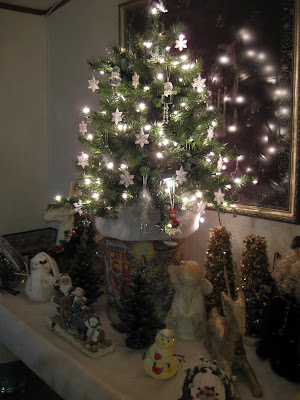 There's another "reality" show coming up that appeals to our prurient interests, further proof that these rocket scientists out in Hollywood are flat out of ideas when it comes to decent television. It has something to do with beauty queens being judged by the show's experts (?) on their "inner beauty"................somebody please vacate the airspace over my head while the concept zips right through it.

Today was not a typical Sunday in the Unit. It was just an inch short of crazy, death paid visits several times, and I went home with aching legs. But, I was in good company, and together we all made a difference, even if perhaps that fact was not apparent to some family members. I don't personally want to die in this place, but there are no finer people I would rather die in the company of then these nurses.

The wife may have given up the ways of Christian Christmas, but she never really abandoned the joy that the idea imprints upon the Westerner who has grown up with this tradition. She is busy trimming the "Yule Tree" (which in many ways is the actual Pagan forerunner of the Christmas Tree) and I have to admit that it does look rather beautiful in it's monochromatic way. The family is still intent on sharing gifts, in the "Yuletide" tradition, which is fine with me as long as I don't have to risk paraplegic injury putting up Christmas lights on the roof anymore. However, I WILL have to say something if the gifts start piling up beneath this tree, ala' "consumption-mass". Frankly, I've had my fill of it, and I think that American Capitalism needs to embrace something other than this month long spending frenzy to support the retail markets profits for the entire year. Maybe this recession/depression will put a serious damper on this stupidly shallow custom of ours.

While I was slaving away serving mankind at the hospital, THE Wife and the Resident Daughter decided to spend the day in St Augustine enjoying the shops, combing them for anything with pagan flavor. They were quite dismayed to see that the bad economy has already taken a heavy toll on many of the shops in the nation's oldest city, many of them boarded up, victims of previously high gas prices and now a deficit of tourists with anything to spend. Exxon/Mobile started this mess, greedy mortgage brokers pumped it up, and I would be very pleased to see each and every one of those greedy bastards put in stocks and mocked by the populace in the streets of Jamestown and St. Augustine, just like they were in the olden days when your honor was something that meant something to you.

Just another Sunday here at Pendragon Hold, weathering the economic storm just like all of you, and hoping to still be here when the winds die down and the waters recede. Blessed Be you all.

We, the people, have lessons to learn.

You know, I have REALLY noticed the dearth of shoppers this year - it truly is a frightening harbringer of the year or years to come ... I mean two weeks BEFORE xmas and I walked in and out of several stores yesterday... while I was partially happy not to have to deal with the anticipated mayhem and craziness, it is very very worrisome ...

I'm terrible about decorating for festive reasons. Any "gift giving" has been done following the actual holiday because it's cheaper. lol Hey, it's not MY holiday, why worry about when it falls?