I came across this news report concerning how rough and loud rock music is being used to break prisoners in Gitmo and other American military prisons, often driving these men mad. I love the Beatles, but even I know one could only take so much of "Helter Skelter".

Musicians protest use of songs by US jailers 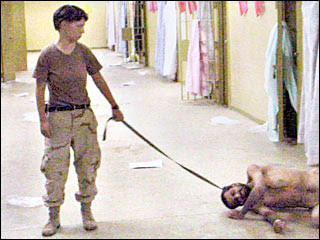 Continually I come across one new outrage after another concerning the methods we employ against captured insurgents in this new "war on terror" that Dubya introduced to us when we should have simply marched into Afghanistan and solved the problem on day one. Instead, thousands of American and foreign lives and more money than any of us could hope to count has been flushed down the toilet of sickness that too many so-called civilized and "patriotic" people call national security. We have made so many enemies in the last six years it's amazing that the rest of the world hasn't outlawed US, much less the Taliban and Al-Quida. And to think that on that fateful day when the twin towers fell, an entire planet of people were not disillusioned with us, but stood with us.

Don't get me wrong. I am all for national defense. I am all for ANY sovereign people's right to defend themselves against aggression. World War Two was the perfect example of a free people finally saying "enough is enough" and turning its full force and fury against a true axis of evil. Even then we did things we should not be proud of having done, but in the heat of war, no nation has been noted for having adhered to the high road, and those white hats WE wore bear the stains. 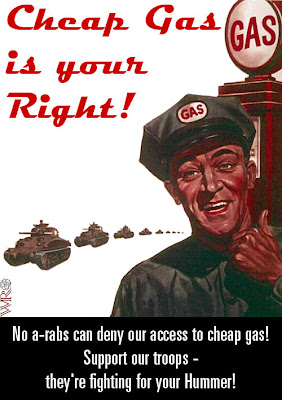 But then came this sense of "anything we do is necessary, no matter how egregious" mindset we thought we had earned by defeating he Nazi's. Even now, there are reports of atrocities having been committed either by Americans or under the watchful eyes of Americans in the Korean conflict, stories so horrible I would dare say had they been brought to light during the war, might have brought a president down. By the time we got sucked into the quagmire of Vietnam, we were convinced that WE were the God-appointed guardians of freedom and liberty throughout the world, and we didn't always want to know exactly how it was being done. Out of sight, out of mind. Isn't THAT special?

So, since we can't seem to perform such an uncivilized job in a more humane fashion, I say we just pull the gloves off altogether, get real honest about warfare altogether, and just say up front that once it starts, anything goes. That's right, folks, if we insist on getting into wars with other people for whatever reason, I say we just do it right, and kill each and every man, woman and child within whatever border it was that pissed us off so much we want to kill people for it. No sneaky toxic time-bombs like agent orange, no "surgical strikes" at key targets that usually just kill scores of innocent bystanders anyway, no occupation and humiliation of a populace......nope......enough of the dishonest bullshit, just DO it, get it over with, end of story. Carpet bombing, nuclear weapons, hell, who cares, just use the most efficient methods of large-scale production style murder our military/industrial complex can come up with.

The Last Ghost of War

Imagine the advantages to this approach. First off, the planet REALLY comes out ahead by having such a large volume of parasites removed from it's infected skin. Then there's all that pressure off our farmers to feed all these people. Less workers to steal OUR jobs. The benefits of total war and all-out genocide are more than I could think of in a blog post. AND, not only do we enjoy the immediate benefits of TOTALLY removing our enemy, but there's the wonderful aftermath of all this horror in that there IS no aftermath. No rebuilding, no costly occupation, no refugee camps, no trials of war criminals (theirs OR ours) and no birth defects or environmental disasters to have to deal with decades after the fact. NONE, NADA, truly the END of the argument. AND, we get to write the history, about how noble we were, how evil THEY were, and how we were chosen by God himself to bring all those sinners to Jesus. That's right, folks, if we could kill a commie for Christ, we can kill ANY class of people for ANY deity, we need not be picky. I mean, after all, when was the last time God objected to anything anybody did in HIS name?

The Taliban and Al-Quida already embrace this concept, and the only thing preventing them from engineering the idea to its full potential is the fact that, well, they are all idiots. Religious fanaticism tends to lower the IQ fairly drastically, thank God.......(THAT is the best pun I have accidently come up with YET!!!) However, WE depend on our rocket scientists, who happen to be mostly secular in their mindset, to develop OUR weapons of mass destruction, so the "Baptist effect" our own military suffers from right now is not to much of a problem; they could still get the job done if we wanted them to, especially if we convinced them that God was on OUR side, which we've been doing successfully for a couple of centuries now. Yes, thanks to GOD, we have this inner peace about our killing that puts every other divinely driven army to shame. And, true to form, some ass-wipe decides that it's a brilliant idea to kill a large number of Americans in one fell swoop, like Pearl Harbor or the Twin Towers, thus learning once again, the hard way, that when you've pissed off AMERICANs, you've pissed off GOD!

Most of the rules do go out of the window when there is a war - except for the losers.

(Why does it always take me 2 to 3 attempts to post a comment in this new format? It isn't that I can't read or type the word.)