A Perfect Film for the Holidays! 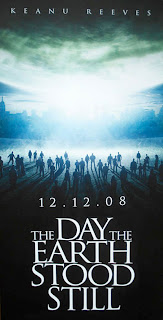 "If the Earth dies, you die. If you die, the Earth lives."

This is the chilling pronouncement made by an alien emissary to the Earth in the remake of the Sci-Fi classic "The Day The Earth Stood Still".

Which is why I very much look forward to seeing this movie. I have always envisioned what it would be like to have a superior intelligence visit us, take one look around, and come to the very obvious conclusion that some serious pest control needs to be done around here. It would stand to reason, to me at least, that any species surviving their own evolution long enough to discover space travel would take a very dim view of the possibility of the human race stumbling across it's own way off this planet and spreading it's brand of sentience across the cosmos. Of course, I really do believe that if there really IS a way to cut across interstellar space lickety-split fast enough to make it practical, we are going to kill ourselves off before we get anywhere near discovering it, unless it turns out that it happens to be so simple even a human could figure it out. Or, maybe the universe will just get lucky and that big rock will find us before that happens.

You probably think I have no loyalty to my own species whatsoever. Well, as downright treasonous as it seems, I have met the enemy, and he was in the mirror. If sentience has done anything for me it's given me the ability to observe and reason based on those observations, and I have not observed much concerning my own species that I find comforting. I mean, think about it, when the best strategy you can employ against a tribe of humans is to simply let them alone long enough and they will take care of themselves for you, then you know something just isn't right. So how could evolution have made such a big mistake when it came to choosing us as the top predator? Well, trial and error sometimes screws up, and apparently that's what happened with us, just like it happened many times in the past when certain creatures reached an evolutionary dead end.

Yes, I know, many of you reading this think of yourselves as perhaps different, as a kinder/gentler version of this nasty creature that does genocide so well. And, relatively, you are probably right to some degree. But you know and I know that each and every one of us is fully capable of doing some VERY nasty things, and all the intelligence and love and empathy we can muster simply cannot make up for those moments of madness we might find ourselves involved in should the right button be pushed. Do you honestly think that all those shoppers amassed in front of Walmart that morning thought they were capable of KILLING somebody simply because they got in the way of low, low prices? Do you think that any of these drunk drivers started off the night plotting exactly how they were going to get wasted enough to take out a mini-van full of children and not even suffer a scratch for their efforts? No, I didn't think so. Our monsters lurk deep within, and we are shocked how easily we can let them loose, not out of malice but out of intellectual laziness.

So go watch the movie, and may I suggest you think long and hard before you start rooting for the "good guys". Do you really think they are US?

At least we got to see Paris. We'll always have Paris.

Ok, I'll accept the fact that I'm a nasty beast because I laughed at the "low, low prices" comment.

Wonder what the chances are that, subjectively speaking, we are the peace makers of the known and unknown universe? Kind of a sobering thought. The higher the being is on the evolutionary scale, the crueler and greedier they are.

"If the Earth dies, you die. If you die, the Earth lives."

Yes.
I think I might break my embargo on going to the movies just to see this one.
And Michael, I've been having trains of thought on a paralell track to yours vis the human race, this last 24 hours.
I wonder if I can put it into words?

Terri, dear, if anyone can, I'm sure you can1

Let us hope that they haven't screwed to much from the original!