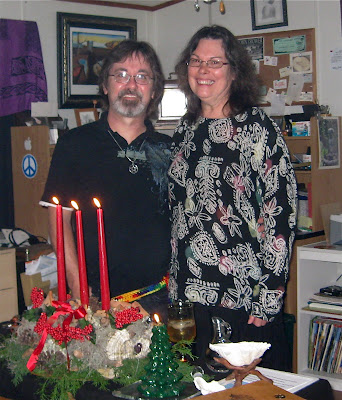 These days, especially since I gave up Christianity for Lent, the worst thing I hate the most about the Christmas season is waiting for it to finally end. It's bad enough that they seem to be kicking off the X-mas shopping frenzy right after the Fourth of July Fireworks have hit the ground, but you have to wait till after New Years for the music (oh that fucking music!) to finally go away. The lights, the tree, it all stays up till then, nobody willing to give up on that warm, fuzzy, now-we-declare-bankruptcy feeling. But, it has to end sooner or later, and I prefer later, thank you. OUR holiday of Yule happens ONE day, the 21st, and then it's over, till the next Sabbat comes around, and no shopping is required. I know I was BORN Pagan, I just wish somebody had told me.

And yes, we did exchange gifts, although only a very few. As far as gifts are concerned, we tend to more or less get what we want when we want it, or rather when we can afford it, and sometimes just because we think the recipient deserves it, for being so damn special, no special date required. This arbitrary waiting till some special day with magical permission to receive a gift is, well, arbitrary. I think that you yourself might have noticed that you have gotten yourselves all kinds of goodies without any special day excuse to get it, on TOP of all the stuff you buy yourselves on Christmas, so you are just as "guilty" as we are.

Just remember, though, that it's the AFFORDABILITY factor that's most important. If you are putting any of this stuff on credit, then maybe you have a problem. Buying things like washing machines and cars and homes and such require we use credit, because they just cost to damn much to just dish out that kind of money out of one paycheck, at least that's the reality for most of us. But going into debt just for STUFF, well, that's just stupid. If you can't afford it, don't get it, and I promise you, you will survive. Really, you will. Save up for it. You'll REALLY love it then!

So, we are waiting for the non-resident loved ones to make their way back home so that we can lavish our love on them (they couldn't be here for Yule) and THEN the holiday will be over as far as "the holidays" are concerned. We'll be looking forward to seeing how many more inches the grandkid has grown, and man has this kid been collecting the inches! Another words, he's really getting tall.

While many of you have been wading through some incredible amounts of snow, we here at Pendragon Hold have been experiencing almost tropical weather, with days getting up into the 80's, so you can imagine how out-of-synch it seems to be down here. All over the nation Mother Nature has been having a field day, with ice storms and blizzards, snarling ground and air traffic, and cutting off power to millions of homes, while down here.........damn it's nice! You hate us, don't you?

The Palestinians just HAD to goad the Israelis into attacking the Gaza Strip again, and I am beginning to lose all empathy for these people. You want peace ,you want the "Occupiers" to leave your land and grant you a homeland, and what do you do? Shoot rockets at them? Are you genetically predisposed to acting STUPID? Then fine, if you insist, if I were an Israeli, I would shoot back too. So just fucking shut up about it while your towns and infrastructure are being reduced to ruble, all because you JUST CAN'T STOP PROVOKING them. And all those "innocent civilians" that are being caught in this stupid crossfire? YOU killed them.

Oh, remember that nagging problem I've been having with the Focus, the idling problem that I can't seem to fix on my own? Well, I broke down and took our beloved conveyance to the Ford repair place and after paying almost a car payment for the diagnostic and repair, had the problem resolved, problem amounting to simply an L-shaped connection to the PVC valve having a hole in it. I COULD have done the job myself for practically nothing, only I couldn't figure out where the problem was or what part was involved, thus the experts stay in business. I truly look forward to the day when we have electric vehicles without these engines with 2548 parts, all designed not to keep you running except to the repair shop.

Thus you have enjoyed yet another episode of the Chronicles of Pendragon Hold, where now the days grow longer, the love grows stronger, and life goes on much as it has for thousands of years, only in new and interesting ways.

Just think, in a few days we will have a whole new year to fuck up.