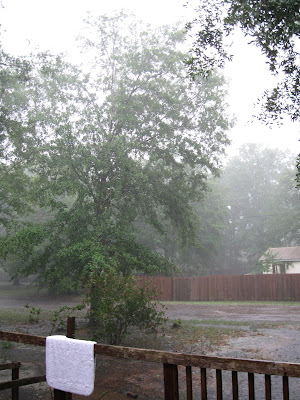 Addendum: I didn't get this out yesterday, it is now Wednesday morning and a line of thunderstorms approaches the hold, promising to ravage us with high winds, some much needed rain, and maybe some thunder and lightening. It will drop the temperatures some, but not enough to make one think it was truly winter again. THE wife has headed to work, and once again I remain behind to take on the chores. So, without further ado, I give you the latest installment of The Chronicles of Pendragon Hold........

Today is payday number one. Number one? Yes, we have TWO paydays this week, THE Wife's today, mine day after tomorrow. AND, we have a Tuesday tradition in which I go pick up THE Wife, deposit her check into the teller machine, then take her to lunch at Panera's. It's our only dining out experience we get to enjoy anymore. With their two-fer special, we split a half-sandwich or salad or cup of soup between us for less than $10.00. It's hard to believe that ten bucks is a deal on anything, but it is these days.

You've probably noticed that the decline in gas prices has halted and is heading back up even faster than it had dropped. Of course, they are quoting all kinds of asinine reasons for this sudden turn-around, but the truth of the matter is that certain interests have been placated for now, and it's time to return to the business-as-usual practice of ripping off the public simply because government no longer protects us against such crimes. They do it because they CAN. Plain and simple.
Of course, these price increases might be short lived if this economy skips the recession altogether and goes for flat-out depression, in which case precious few people will be buying any gas at any price, what without a job to get to or a paycheck to purchase it with. Only THEN will supply and demand have any real meaning.

Speaking of the economy, I am trying to remain philosophical about the situation and not worry about mine or my spouses employment, but the news keeps coming bad and worse, and aside from attempting to trim my spending as much as possible now, I honestly don't know what the hell I am supposed to do about it. This is one thing I hate about capitalism the most; this sense of a total lack of real control over my own destiny. Oh, sure, I could find some bootstraps somewhere, pull like hell on them, and find myself sipping cocktails on the deck of my Yacht. And I am quite sure that person sipping that cocktail would be some mere husk of what I was as a person, because I honestly don't how anyone can achieve such opulent overabundance in material wealth without having hurt at least one person. I would have no problem winning a lottery or such other means of landing some cash, but if I have to become a victor in a game of winners and losers, then I choose not to play the game.

That's why I am so attracted to the idea of being able to live in a sustainable fashion that is not dependent on some soulless corporation giving me money and benefits in return for my labors, until such time they can do away with me. To be able to harvest my own power from the sun, my own vegetables from my garden (grown organically to boot), and eating chicken and eggs from my own coop is a very attractive alternative. Only this society makes that sort of lifestyle a very difficult proposition, in many ways. First off, I do not have the infrastructure for off-the-grid power in place as I never have been able to afford it. Then there are property taxes and all those other associated property-based taxes and fees which must be payed with money and not eggs. Bastards will NOT take eggs......... Health care is another burden which requires a wage-paying job, unless you want to endure the humiliation and pain of attempting to get some sort of medical care at the local emergency room, along with all the other marginalized citizens. Then there's the cost of living in this society which requires you feed Walmart money in return for things you think you need to live.

I honestly think I could wean myself away from the mainstream of this society if I could only start over with the idea of divorcing myself from it entirely my sole goal in life. Thirty years ago, that is. Hindsight is indeed twenty-twenty, but something else we need to factor in is that we are different people now then we were those thirty years ago. Back then the most important thing to me was sex, drugs, rock and roll, and how to get my paws on a muscle car with a hurst four speed shifter and a hemi. Well, fast forward to today and my priorities do not at all resemble those of my youth. Now, I seem so much more aware of the world around me and the sad shape it is in, and the idea of wanting a gas-guzzling, tire-burning conveyance seems downright silly. That really big and fancy house I imagined living in would be one hell of a thing to maintain, physically and fiscally. Fashion....well.....that is an alien concept as opposed to what it meant to a young man desperate to blend in while claiming to stand apart. There are so many dreams I had as a youth that life has revealed to me as bankrupt from the beginning, yet I am still immersed in a society chasing those same dreams with just as much vigor and just as much damage to the world as a whole.

With a new depression looming, now would be a fine time to rejuvenate that old tried and true and often failed idea of the commune, if only for the duration of the hard times, and I would be more than happy to throw my lot in with a batch of old hippies who would love to give the concept another try. Who knows, maybe from the ashes of our old ways of life might rise a new, more sustainable society that our kids can thrive in rather than see themselves handed a third-world existence much like what Mexico has now fallen into. If we could somehow bury the idea of the corporation once and for all and return the fruits of our labors to us, the actual laborers, then I think we might could tamp down on this ridiculous consume -everything approach to life and adopt a survival strategy for both us and the planet we all depend on.

Till then, I will ask the God and Goddess for favor, not for riches, but for enlightenment and fulfillment of the soul. The rest will follow.

This is a great post. Thoughts that echo my own. Our gas went from $1.57 on Monday morning, to $1.79 Monday afternoon, to $1.89 yesterday afternoon. Crazy. Is it because of Israel bombing Gaza you think? Ok, the sipping champange on my Yacht may have hit home here, but we sip RUM, and the money we spent on our Dragon went to our local boatwright (the Olympic Sailing Team Boatwright at that!), also our friend, who has a post-Katrina $500,000 mortgage, so we're supporting our local economy here too. Our attempts at a winter garden mostly failed, as our summer garden plots seem to be in the shade all winter, so greens don't grow well. Luckily, our neighbor down the street has a beautiful 5 acre garden he shares from. Hence, our fresh picked that morning bag of greens for the new year! Yum. We're plotting a new winter garden on the other side of the yard now. Commune living might not be too bad. If you get one going, let us know. heh.
Blessed be.

Jules, hun, when I refer to "Yacht", I speak of those $3.2 million dollar hotels on water you find achored off the Riviera, the kinds that cross oceans and need crews. I would never seek to deny people owning a sailboat, or anything they earned honestly and with entegrity. However, how many vacation homes does one family need? (Maybe 8, if we use John McCain as an example).

I'll be honest, I would hate to be a commune, because people are people and inevitably a hierarchy would happen and all the same old shit would occur ...

I would LOVE a windmill in my backyard though and would be happy to get solar panels for my home - but damned if anyone can afford those things!

I agree about the gas - GRRRR - friggin gougers!

Thanks Michael! ;o) Hey, at least our boats don't use gas! Good ole windpower is how we sail!

Our gas stations on the Parkway must have regained their senses, because last night I noticed that the $1.89 has come down to $1.75 and is holding steady this am.