Nothing from Nothing leaves Nothing 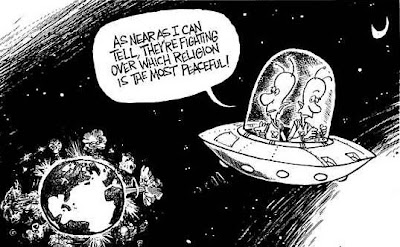 Having been referred to Christopher Hitchen's "God is Not Great", I took a gander at the synopsis in Wikipedia, and behold, there lies one of the few rational examinations of ANYthing you will find that includes within it's covers words such as religion, God, or faith. I think the man is brilliant; and then you guys glance back at ME and say, "But, THE Michael, aren't YOU a religious person?"

I know, it sounds counter-intuitive, but I have never considered having embraced Wicca as having become religious. For one, my beliefs, or shall we say "preferences of desired states of existence", were not born into, or indoctrinated into, or forced into, as most of religious people are found to have attained their labels. Second, nothing in Wicca flies in the face of reason as long as you don't get stupid and declare to yourself that anything one must "believe in" rather than "know" can't be taken with a grain of salt. When I stated earlier that my faith allows for possibilities, I meant that to apply in both directions, as in abandoning one assumption while embracing another, depending where facts might lead me, or where facts cannot dissuade me. My logic alone insulates me from believing that a jealous, bipolar white guy lounging in clouds above us runs this universe, or that I have anything to fear based on what the bible claims I should. My logic DOES, however, allow me to believe in Gaia as a living organism, symbiotic, vast, complicated, and yes, sentient to a degree we might not be capable of recognizing. I have gazed upon the wonders as delivered by the Hubble space telescope and surrendered any idea that we or this planet are the center of the universe. And my logic allows me to believe that magik might be the best tool available to me to connect with the subatomic level of all of creation, if only because physicists haven't gotten around to a straight-forward method of doing the same thing, perhaps with something that has buttons and wheels and works like an iPod. Me, I prefer my wand........no USB cable needed.

My own inclination to wish bad things upon bad people comes from my own evolutionary inclinations, and that I consider my own cross to bear and not the fault of some demon or fallen angel. I will not come out of a church screaming for the head of an infidel while in the same breath describing my God as loving. I will not resist stealing something that is not mine because a commandment was written on stone, but because it is a basic, rational rule worked out within civilized society for everyone's protection. And yes, I will lust after my friends wife, especially if she's hot, which is NOT to say that gives me any license whatsoever to act upon that lust, especially to the detriment of my own spouse. So the bible and all who wrote it can go fuck themselves. We do not need weird God to draft our codes of conduct for us.......and they sure as hell haven't had any success making us abide by them anyway. We have both the death penalty and the highest murder rate outside of the Middle East, so what does THAT tell you?

Yes, I believe in things that will not soon or cannot be proven, but not at the expense of my common sense and ability to question. And unlike religious people, the ones living according to codes which should make them the nicest, safest people in society to live around, I do not find excuses within my spirituality to assault other people who are different from me in race, creed or color. I can find plenty enough reasons to fear people without getting their God or their religion involved. Assholes are assholes, no matter what pew they poop in.

This is good. I like it when you wax. Interesting stuff here Michael.

the book is fascinating, as you point out a 'rational', non-fanatical balanced look at the horrors wrought by organized religion on the world since time began .. the passage that resonated with me was Hitchens' comment that should he be in a strainge city at dusk and a group of men were coming toward him, would he prefer they were 'religious' men or not religious - he said the latter of course and then calmly detailed WHY ...