Hello and welcome to The Chronicles of Pendragon Hold. I'm your host, Alex Pendragon, AKA THE Michael, and I run this joint, or at least THE Wife allows me to think so. We are both taking a short little stay-at-home vacation, or at least THE Wife is; me, I'm not sure, since I agreed to be on-call at the hospital on the two days I wanted to take off. I blew my PTO (Paid-Time-Off) hours on my back injury last month and thus had to alter my plans to have a bona-fide vacation with THE Wife, instead agreeing to be available to work if needed, thus I MIGHT have to go into work tomorrow or the next day or both. Thus is life in a cruel economy. 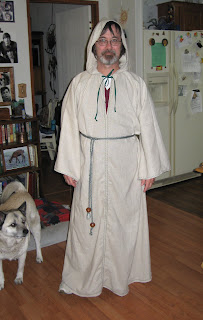 Bless her soul, THE Wife is getting used to this never-getting-to-go-anywhere situation we find ourselves in these days, instead catching up on projects around the house such as sewing our new robes for our circle ceremonies (and here are the pics I promised) and working out with the Wii fitness program. My attentions have been on this ailing computer of mine, and I have ordered a new airport card* as well as a new superdrive to try to get her back into shape. I was fortunate to be able to find a new airport card with a third-party dealer, and the superdrive I found on Amazon is actually an upgrade of what I had, at a VERY good price. The new one will burn the new double-layer discs. I am going to install the drive first and reinstall my OS, since I think that my airport problems might be due to some snarky software updates from Apple. It WILL kinda piss me off royally if it WAS totally a software problem caused by Apple and my Airport card was just fine after all, but I won't know one way or the other until I get this new drive installed and can redo the system from scratch. Such is advanced technology, which also gave us DDT and the Hydrogen bomb. Go SCIENCE!

The weather is FINALLY acting as though it was winter here in sunny Florida. It supposedly froze last night, and is due to be even colder tonight, with high winds really making things nasty. This time we put the delicate plants back into the shed and I have taken the usual freeze precautions, like dripping faucets, etc. However, this sinking of the mercury is NOT going to be kind to our wallet, since our heat is all electric. I really wish I had taken advantage of that wood stove for $275 last year that went up to around $400 this year.

Our new Commander-in-Chief is finding it hard to fill cabinet posts due to the habit of so many nominees thinking that paying taxes is something they might get around to sooner or later. He campaigned on a promise to enforce strict ethical standards, and darn if it doesn't turn out that there's a whole lot of politicians there in Washington who haven't been as ethical as they should have been, and even worse, they were Democrats! Gasp! However, if I were the Republicans, I would keep my mouth shut about that, since if my memory serves me right, it's awful damn hard to find a conservative in that town who even knows how to spell ethics.
I really do admire Obama's embarrassment and willingness to take responsibility for not having fully vetted these nominees. Bush never took responsibility for ANYthing he screwed up.

We've both been working every day on our Wii Fit, and so far, we have not made great leaps and strides in weight loss, but this is only our first week, and we have been unlocking new exercises and Yoga poses as we go. We need to throw in some treadmill as well, because as "Fit" as these routines can make us, we STILL need to burn some serious calories if we are EVER gonna get ahead of this extra weight we've collected.

THE Wife made me clean up my desk today, something that simply throws everything off for us (Men). Yes, there is a rhyme to our reason, a method to our madness, a genuine need for this apparent disorder which in reality is a highly complex filing system that fits right in with our ability to do 5 things at once while appearing to not being able to hear our wives trying desperately to distract us. I wonder how many award winning authors are married?

On the religion front, it seems like God's right hand man, the Germanic Pope, is once again in hot water with every person on the Earth he can't excommunicate. It seems that Mel Gibson's Father, the Bishop Williamson (don't ask me how a guy with offspring ends up being a CATHOLIC Bishop) doesn't believe any Jews got gassed by the Germans, and this rather obtuse belief comes out AFTER the Pope rescinds his excommunication for being a little too right-wing as Catholics go. The Pope explains that he was only trying to "rehabilitate" the wayward Bishop by "bringing him back into the fold". Yea, right. I suppose you could "rehabilitate" Hitler for perhaps being a little too hard on those people who murdered Christ. I suppose you could "forgive" Osama Bin Laden for "misunderstanding" Christians and every other innocent person him and his minions have murdered. Tell ya what, Pope Pathetic, how about we "rehabilitate" GOD for killing all those millions of people during the flood, or all those children during passover? Yea, sounds like a plan to me.........

While I'm on THIS rant, why didn't God NUKE new orleans like he did Sodom and Gamorra, instead of just fucking it up royally with a monster hurricane, during the BUSH administration, of all times? I need to ask the Baptists about that, such experts in what makes God tick as they are.........

Oh, and Mr Obama has clamped down on CEO's of major corporations accepting government bail-out money by capping their salaries at "only" $500,000! Imagine that, a hard-working CEO having to settle for only half a million clams for a paycheck..........how terrible! I mean, with the price of heating oil these days, how is a CEO going to heat one of those mansions through the winter. What, are they expected to shut down their 5 hot tubs? Hell, the family dog might even be forced to move out of his heated dog estate and come inside with the....the......shudder...HUMANS! The INJUSTICE!

Instead, why don't we get rid of CEO's all together, let us workers do our jobs for decent pay and benefits, and spread all that CEO butter over OUR bread instead? Imagine the returns the shareholders will be getting when it isn't all going into on big fat ass pocket? Imagine having a happy, healthy workforce producing superior products at competitive prices? Naw............conservatives would be leaping out of their country club windows in droves. This is America, where everyone deserves every penny they suck out of the skins of hardworking stiffs like you and me. 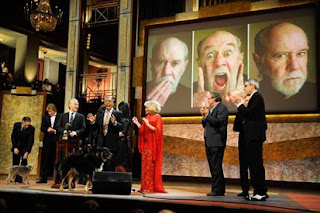 Well, I may or may not be working tomorrow, so I will leave you all with the following sentiment, delivered by one of the sweetest songs I know........

Careful - you're starting to sound like a Socialist! lol It's a mighty lonely club to be a member of, especially right now, I can tell you that.

I miss George! I taped the ceremony to watch later today. Good luck with the upgrades!

Oh I sat through the entire Carlin tribute. I can't believe his memory chip..plus I can't speak fast so when they showed those clips of him doing his riffs my jaw is hanging on my lap.

I loved his schtick on wittling down the ten commandments..wasn't that brilliant.

Nice touch too when Maher said I know you can't see us George.

I loved how they analyzed the power of comedy..the examination of the truth.

I stopped by to say howdy instead of reading on my RSS feed.

I turned on PBS late and then promptly dozed off during the Carlin broadcast.

Sometimes I have no idea what ya on about guess thats why I keep coming back....