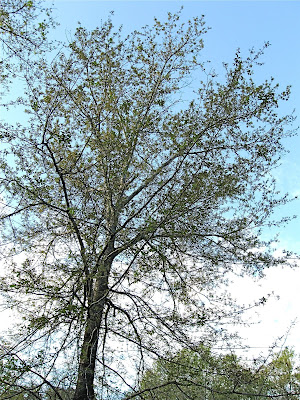 Well, it's official, at least according to Mother Nature (Otherwise known within Wiccan circles as The Goddess, or sometimes Gaia). That fresh, bright, alive shade of green is popping up everywhere with that assurance that we will not see another freeze, an assumption I'm sure the Holly King will mess with first chance. This last week has seen daytime temperatures as high as the 90's., and Pendragon Hold is already drawing juice from the grid to feed the cooling monsters. Another sign of Spring is the sunburn the wife suffered for working outside in this gorgeous weather in a brief top and no hat. Me, I'm now a literal redneck (no hat either).

While she was out raking leaves while I shredded them, the wife seems to have pulled or otherwise hurt a muscle in her shoulder/back and had to call in sick in order to see the doctor, who happily shot her up with steroid/painkillers/magic potions, which are helping for now, but she's back to work tomorrow, and it's my weekend to work as well. I personally have had a very stiff and sore neck for at least two weeks and it's taking forever for it to get over whatever I did to it. Damn body parts, always crying out for attention. Never USED to be that way....sheesh!

We moseyed over to the Ace Hardware that has an extensive nursery and picked up the first of this years herbs to plant in the terrace garden. Next week I will get the veggies to plant out in the main garden, and I am sorely tempted to try out a novel new way to grow tomatoes.......get this.........UPSIDE DOWN! Yep, you hang a bucket from something at least five feet up and grow a tomato plant out of a hole in the bottom, watering and fertilizing the plant from the top of the bucket. There are some real advantages to this approach, the best one I can think of being that you are really posing a challenge to those damn bugs getting onto the plant. You don't have to stake the plant, and it is otherwise pretty similar to growing your tomatoes in pots, cause, well, you are. I think I'll try maybe two to start with and see how they do, and plant the rest in the bags of soil I'll be laying out this year.

It just occurred to me that the Republican party did a somewhat hilarious thing in response to the first other-than-white person being elected president. They made Michael Steele, a BLACK guy, the "leader" of the Republican party. Only thing is, that title seems to already have been assigned to Rush Limbaugh, who hasn't even been elected to any office. And THEN, to add insult to irony, Steele keeps saying things surprisingly democratic, but of course, in able to keep his job, he reverses himself as soon as Limbaugh complains. "Man of Steele", indeed! If Michael Steele honestly thinks that his position is anything other than token window dressing, he really needs a clue. I think even Colin Powell eventually caught on to the fact that he had joined a club that would not have tolerated him if it didn't have to.

It's several days later since I started this post and nothing has changed to increase the entertainment or informational value of this edition of the Chronicles. What a pity. Isn't it sad that you come here expecting something epic and end up with something septic? That was supposed to be funny. My bad. Today was the first day of my week off from work. Why did I take an entire week off? Well, the 18th is THE Wife's birthday, and the 20th is Ostara, otherwise known to you barbarians out there as the Spring Equinox. That's a fancy word for one of two days in the year when the day is divided equally between daylight and dark. Having two such epic events to deal with, I honestly HAD to remove myself from the workaday world in order to deal with them, that, and the possibility that a very good Blogger friend of mine might pay us a visit during this most August of weeks. In March, that is. Never mind.

One of the symptoms of my ever increasingly aged body is this damn neck pain I have been having lately. Usually with a pulled muscle, some muscle relaxers, some massage therapy, some heat and cold, and I'm over it in no time. Yea, the time increases each time, but that's another story. Yea, I'm doing everything I can sans the physical therapy, which costs money and involves large men with german accents, but you'd think there would be SOME improvement by now. No dice. My regular doc seems to think it's only going to take some time. I hate this time thing, especially when it takes so much of it. Where's the Devil when you are damn happy to sign that contract of his? Whatever, I don't believe the bastard exists anyway........... 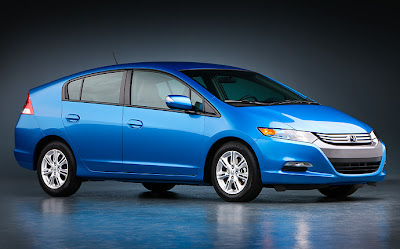 I just saw the commercial for the new Honda INSIGHT, their answer to Toyota's Prius. I didn't see the mileage specifications, but it sure looks sharp! It kinda looks like an F-22 Raptor versus the old F-15 Eagle........if you can wrap your head around THAT comparison.....guys, help me out here.......... 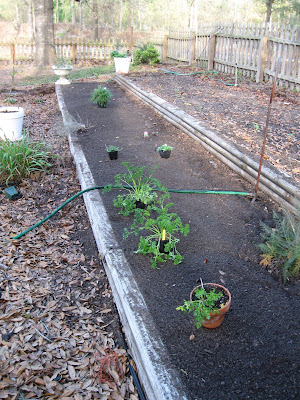 Oh, and today, while THE Wife was toiling away at work, I was toiling away on the second tier of the terrace garden, double spading it in preparation to plant the herbs we bought this weekend. It took all day and I feel like it took a week! Thankfully, the weather was just perfect, with cool breezes that cooled me down as I worked up a sweat with my iPod in my ears and a shovel in my hands. I love ibuprofen. 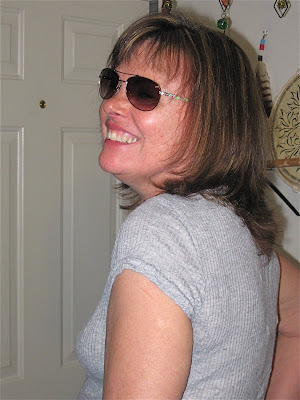 THE Resident Daughter treated THE wife to a new hairdo, including highlights that turned out beautifully golden. Said Daughter also treated herself to a new tattoo. It seems the females in my life have become canvasses for an age-old form of artistic expression, one that has had an upsurge in societal acceptance. You may have noticed the increasing incidence of the so-called "tramp-stamp" across the backsides of young (and even older) women that is shown off in concert with bikinis and low-rider jeans. I have only one warning to issue to the younger ladies.....tattoos do not age well. Me, personally, I might try out a handsome Green Man on my upper arm, that is, when they invent the pain-free tattoo. Did I mention I'm extremely allergic to pain? 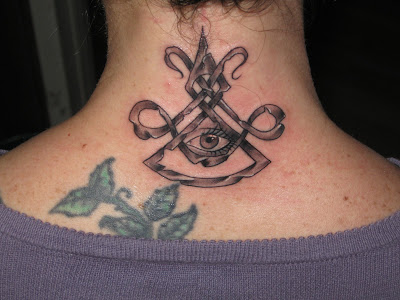 Well, there's plenty enough to bitch about in the news, such as the bonus scandal with AIG, but I have to get this long-overdue edition posted. I know that some of you, my fellow bloggers, are starting to feel real impacts from this economic meltdown. I share your fears and have my fingers crossed, for I am no more immune to this lurking monster than any of you. Be assured that all of you, your health and welfare, are on my mind and at every circle we cast I ask the Gods and Goddesses to be kind to you. You all have been kind to me with your attention to this cry in the wilderness, The Chronicles. Blessed be you all.

I feel your pain, literally. We've been fencing to keep in our new dog, and I can't hardly turn my head for the crick in my neck. On top of that is the pollen. Sheech, how much snot can one nose produce?

We're looking at getting some plants here soon too. Usually we wait until Good Friday, but the weather here sure seems nice enough to be planting already. I'm ready for some fresh jalapenos.

Happy Birthday to The Wife. I love her new doo! She looks so young and hip. Good for her for taking the Resident Twin up on the offer. Love the tat too! Hahahaha, tat too! AHAHAHA!

Have a great Ostara! Blessed be!

To return to the halcyon days of the muscle car ....

Oh yeah, one more thing. On the upside down tomatoes: I tried that 2 years ago. I dutifully planted the plants and hung them up. As they grew, the first thing they did was face plant their little selves to the underside of the bucket. As they grew, I had to keep moving the tops over and over until they got to the edge of the bucket and then they shot up the side. It was a dismal failure. I think I only got a few fruit off them. I plant them in the garden now. My DH was not impressed with my efforts. I also did some peppers that way, same outcome. I wish for you better luck.

Thanks for your input on the upside-down tomatoes, Jules, I think maybe I'll stick with the natural way.

the garden looks awesome, I think worth the stiff neck!

love the tat too ... and I don't CARE if they age well...one of the wonderful things about aging (as female anyway) is you care LESS and LESS what people think!

I personally want to be a rocking old lady who they think is a sweet old thing until thye see the tats and piercings....

I have been a lurker on your blog for quite some time now, and I have to come out of the closet and say that I love it.

I will be an old lady with tattoos that don't age well, but I figure, since we are all going to look like shit eventually anyway...

Blessings on your time of White Water.
We're in the season of Rushing Dark Water now. and I feel it carrying me along strongly.
It's good to know that as we descend, somewhere in the world an Ascension is even now taking place!
Happy Birthday to your beautiful Pisces wife. She probably needs to watch her feet, if she's typical of the sign.

Well, thank you, Autumn, and welcome to the Chronicles. It's always a pleasure to have new guests show up. I hope you enjoy your stays with us.

And yes, Aquila, she HAS had foot problems, but then, she has muscle problems all over the place. but she bears it all with grace.

I don't know Michael, maybe you could try it with one or two. Your experience may be much better than mine. One never knows until one tries eh? I've seen HUGE upside down plants that produce plentiful fruit. In photos, never in person. Let me know if you do. I'd like to see your results.