Me, That Damn Tree, and the Missing Purple iPod

I arrived back at work after my week-long Spring vacation and was promptly greeted with "Michael, you are definitely in the WRONG profession!" by one of my nurse managers. I swallowed hard, since that kinda phrase is usually followed by something I definitely didn't want to hear........only this time she followed up with, "You really ought to be a writer!". I let my breathe out, kinda surprised.

"Where are you getting all this from?". I asked her. She responded that she had been reading my blog that one of the other nurses had directed her towards, and complimented me further by insisting I'd be a great fiction writer (which in turn made me wonder if "The Chronicles" really were sounding to good to be true, thus perfect fiction material...). Then, after mentioning to the Big Boss later that I'd been complimented, she also commented that she's overheard a lot of nurses discussing my blog. I had truly mixed feelings about that, hoping like hell that I had not written anything in my blog that could get me fired, as has happened with plenty of folk, but it still made me smile inside to be thought of as talented.

I have real problems with compliments. I crave them while simultaneously rejecting them, somehow feeling unworthy of the very praise I seek. I don't imagine I am the first person to have such feelings, but it's annoying when I think about it. Being complimented on my writing many times brings to mind that Harry Chapin song "Mr. Tanner, about a baker who sang all the time while working, who was urged by his friends and customers to seek out a career in singing, only to be raked over the coals by the critics once he worked up the courage to try it. He went back to singing in private and never singing in public again. I would certainly hate to suffer the same fate by submitting a manuscript and getting viciously rejected for it. I have been to Books-a-Million and would not care to have to compete with the other 37000 other authors wanting you to buy their book. I love writing. I don't know how good I really am at it but I love doing it. Sure, I'd love to get paid to do it, but hey, if I had to pay for every blog post I read, I'd be broke in no time. I follow many a blogger who in many ways are far superior to me. Not every thing in this world of ours has to have a price on it. 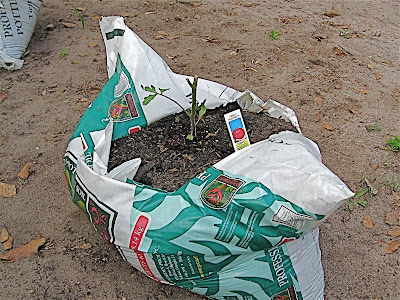 While we were all at work, one of the twins, the four-legged variety, decided to slip under the wire and sample the new garden I had just planted. She did this three times in a row, making it out of her secret escape space beneath the fence of the pen and taking off the tops of another tomato plant, before I managed to get all the weak points shored back up. DAMN! The wife seems to think the damaged plants will still grow, and I hope she's right. 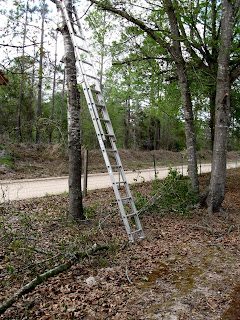 We have this row of trees along the Western perimeter of the Hold, and one of them has been squeezed in between two other bigger trees, the result being that it has been somewhat stunted and leaning far to much out towards the road (and the power lines that run along it). I have decided now is the time to cull it out, but unlike most of the other trees I've had to cut down, this one I can't anchor with cable in the proper direction for cutting down without falling over my fence, onto the road, taking the power lines with it. So.......the only alternative is to climb this sucker and hack it to pieces from the top down. Well, I'm a few years older since the last tree, and not quite the monkey I used to be. These limbs of mine don't seem to bend as well as they once did, so climbing this tree hasn't been the breeze it might have been ten years ago. Still, I have half of it down already and plan to go after that top section tomorrow. Only hesitation I suffer from is that my wife won't be here to watch me fall and bring me my gun if I survive the plunge. The shape I would be in if I DID survive a fall from that height would preclude me wanting to allow rescue to haul me in to the hospital so they can make a good little quadriplegic out of me to suck the life out of my wife and the system for years to come. So, I plan not to fall.

A terrible thing has happened to THE Wife since yesterday. She has lost her new purple iPod, and is absolutely distraught over it. So am I. I'm hoping she can somehow come across it again, but if not, well, that's another $150 if I want to get her another one, which being the loving husband that I am, I would.

It's been a few days since I started this post, and THE Wife has not been able to find her lost iPod, so I've given her mine. It's the previous generation, the square one, and it's not purple, but she's on the couch right now having just as much fun on it.

I made it almost to the top of that tree where the height and strong breezes conspired to activate my usually controlled fear of heights. I did manage to saw halfway through one of the upper trunks but the possibility of it falling in a manner which would bring me down with it put pause to cutting all the way through, and I tied a cable to it in hopes of pulling it the rest of the way off from the safety of the ground. Ah, the best laid plans of mice and Michael's.........damn thing would NOT budge. So, I spent all day staring at that mess of tree top wondering just how in the hell am I going to detach those upper sections in a manner which precludes my accompanying them (screaming) to the ground. This is going to take some study, or rather, truth be told, working up the courage to just get the hell up there and do it. Without a very large vehicle with a winch to pull it in the direction opposite from which it's leaning, there's no way I can safely topple it from the base. I wonder if controlled detonations...........hmmmmmm............naw, better not............

We finally got some rain today, which I am sure all the newly sprouting plants and veggies are much happier with than the sulfurous well water we normally have to water them with. There's something about rain water that just brings out the best in everything......even people.

Well, it's back to work tomorrow, so I'll finish this post up and upload it into the World Wide Web where I hope it will be enjoyed before some nasty virus comes along and gobbles it all up. Yes, it's a dangerous world out there amongst the copper wires, silicon chips, and humming servers of the Virtual Universe. But you're safe with me.............

Of course you're a talented writer... And of course you're going to reject and crave that praise too. I do the same thing but I suck as a writer - everything's hollow.

Sorry to hear about your wife's iPod. Mini Me lost her MP3 player and didn't tell us for months and THAT was the part I was pissed about. Therefore we're not replacing it. I'm a mean mom that way. Dishonesty is NEVER rewarded. And that had absolutely nothing to do with your story... sorry. lol

Michael, I hope you post periodic photos and updates on your garden. I've heard of people using the same bags for a few years in a row.

Good luck with the tree. Be careful!