OK, this is Sunday, the last day of my Ostara/Wife's Birthday vacation. What do I do now? Post? Sure, why not? Got anything to post? Sure, we ALWAYS have SOMETHING to post here at Pendragon Hold! The caveat is having something to post that people want to READ. Well, here goes.......... 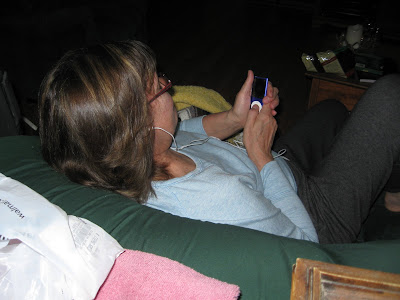 THE Wife was awarded her prize for surviving another year, a purple iPod Nano, as well as various cards that sarcastically made fun of her station in life. The Non-Resident Daughter sent her a homemade electronic music card that was hilarious, having to do with Twisted Sister. Please try and remember the generation from which we spring. We ROCKED! Anyway, the very woman who always found fault with my love for gadgetry (as in iPods) has now fallen under the spell of the personal music player and is having a ball with her new toy. She even asked for and received a music video of Michael Jackson's "Thriller" downloaded and installed on her new play-toy, which has been stuck in her ear for most of this last week. Guys, I think you can appreciate the small victory I have scored in this regard......

We had a pleasant circle last night for Ostara (yes, it was a day late but we WE'RE trying to accommodate guests who work weekdays) and managed to keep MOST of our candles and lanterns lit despite a very windy evening. THE wife, also the High Priestess of Pendragon Hold, performed magic which involved hard-boiled eggs and wishes of health, prosperity, and other such desires. She worked hard on this ceremony and I think it worked out well. 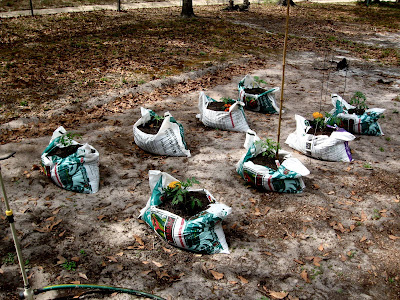 The garden, both terrace and veggie, is now established, and I have photographic proof of the crime. I am sitting here wondering why now, of all times all year long, one of the twins (goats) found an escape route out of the pen and ate the tops off three of my new tomato plants. I will probably have to replace each one, and I hope that the reinforcement of the fence containing these creatures has solved the problem. If she had made it into the terrace garden and munched out on THE Wife's herbs, we would probably be having roast goat tonight.

We have neighbors down the lane here who have been noisily zipping up and down our dirt road on those four wheeled conveyances prized by rednecks and hunters known as the ATV (All Terrain Vehicle) This would not bother me, even the noise, if it were not for the TODDLERS that this family has been hauling around on these deathtraps-waiting-to-happen at speeds up to 60 MPH, with, of course, no helmets or anything other than their tiny little arms holding on for dear life, keeping them from being flung off to their to very possible deaths. I am so tempted to call the Sheriff's Department (which I think has been done once already, apparently having only a temporary effect) for no other reason than protecting these very young kids from a blatantly unsafe and illegal practice, but then I think of how this is the kind of thing that natural selection depends on to limit the propagation of those genes which lends itself to species suicide-by-stupidity. Yes, I know it sounds cruel, but maybe if we allowed these people to pursue their self-limiting behaviors, instead of protecting them from their own deadly behaviors, we could once and for all weed out these genes which make people expose their own offspring to such hazards. We've already screwed the gene pool by allowing survival of the least fit amongst us, compassion aside.

As far as national politics is concerned; it appears we have a president who is fully capable of legislating, governing, AND dashing about the country, communicating with US, the people, the ones who elected him, to share his thoughts about what he's doing AND getting OUR feedback about what he's doing, and the Republicans just CANNOT FUCKING STAND IT! The best that THEY had to offer that last eight years couldn't even TALK and THINK at the same time, much less multi-task the way that Barack Obamma has been doing. I think that what is going on now is proof-positive that our ability to have a non-partisan approach to governance is beyond us now and we might as well change our system to a winner-take-all system where you elect one person, and those who lose just shut the fuck up for the next four years, because it is plain as day that the Republican Party is totally incapable of co-operative thinking that strays outside their very narrow outlook concerning politics. For more than three hundred years we have survived as a nation by the art of compromise and the love of our constitution, but now we have a conservative party that knows it's time has long past and can't accept it, and is now intent on bringing the country down rather than allow a philosophy of caring for one's fellow man. So sad, so sad, so very, very sad.

OK, that's the outlook from the Hold. May you all somehow survive the storm, and be able to laugh about it one day in the future when laughing is once again in vogue. Blessed Be!

I have a use for my iPod. It gets plugged into my ears when I get to work before the night shift has clocked out.
The night shift is mostly young 20-something guys, who get raucous as their shift draws to a close.
So I block them out with Gaia Consort and Aesma Daeva.
We had to enclose our vegetable garden in razor wire, because the dogs loved to dig up whatever we'd just planted. We have veggies in Auswitz.

Umm.. natural selection crossed my mind too and even before I read your statement about it.

I thought the partisan politics was already in play? Are we still pretending to be bi-partisan?