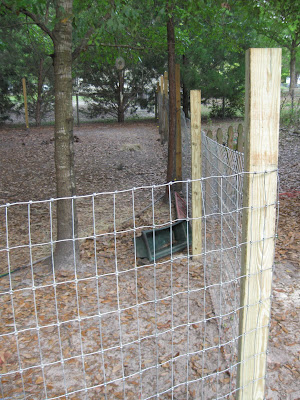 It's been a busy and interesting week here at Pendragon Hold, our little acre of sand on the edge of suburbia. Having seen my new garden all but wiped out by our little four-legged Houdini, and finally having seen a paycheck clear and sufficient to purchase the necessary materials, and thanks to a weekend of clear weather, I have finally strung up the new woven wire fence around the goat pen and put an end to the escapades of Sorcha, the low-riding four-legged escape artist. It took me both days to set the posts and stretch the wire, but the deed is done, and we also purchased new veggies for the garden to replace the casualties. THE Wife made a special little veggie "CCU" at one end of the terrace garden to give the eaten and severely damaged plants a place to rest and possibly continue to grow, so that they might yet fulfill their destiny and not go quietly into that dark night without having produced the fruits of their purpose. They deserve that second chance, doncha think?

This also marks the occasion of THE Resident Twin finally striking back out on her own, having saved up enough money to land herself a new apartment.. We, of course, have mixed feelings about this. We lose the rent, yet we gain the ability to romp around naked in our abode when ever it strikes our fancy. Not having had our fancy struck for awhile, this being by ourselves seems strange, but we have to remember that this is actually what NORMAL is supposed to be like. We wish her all the best, and hope that she can rely on lessons learned, like all of us do throughout our lives. She remains close enough and she knows we are always here for her.

Remember that tree I was trying to bring down? It's still there. Only a storm brought down the massive limb I had sawed halfway thru but couldn't pull down on my own. This piece of the tree was SO big, matter of fact, that I received a frantic call at work by THE Wife informing me that THE Resident Daughter had called HER and said that a tree (not a big limb, but a whole tree) had come down in the road and was blocking it. Under the impression that the tree had actually been uprooted and brought down on the road, my fence, and possibly the power lines, I told my supervisors I had a dire emergency at home that required my immediate attention. I rushed home to discover that this "tree" was in fact only that limb I'd been trying to fell myself, and the damage wasn't quite as bad as reported. It HAD put a sizable dent in the fence, but it was not blocking the road or affected the power lines. So, within maybe 15 minutes with the help of my trusty electric chain saw, I had the wood chopped up and taken out of the way, no really bad harm done. Then, I was back at work within the hour and finished out my shift for the day. It COULD have been worse but thank the Gods, it wasn't. 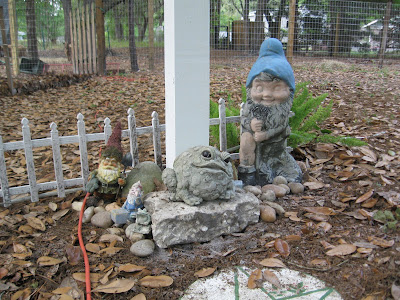 On our way to "THE Depot" for one of many supply runs, THE Wife happened to notice that someone had placed several concrete and/or plaster garden statues out by the road for whoever to take. She got me to stop on the way back and she asked the man working around the property if they were indeed being rid of, and he said they were, so now THE Wife has in her possession a nice gnome (the one in the blue hat) and an old fisherman, who she has given a new pole. This is the essence of recycling, and no good Wiccan worth their salt are going to allow a perfectly good gnome to suffer the fate of the landfill. Having "rescued" him, she feels this creature owes her. Still, I have this thing about gnomes, so, one false move, and the gnome gets it! 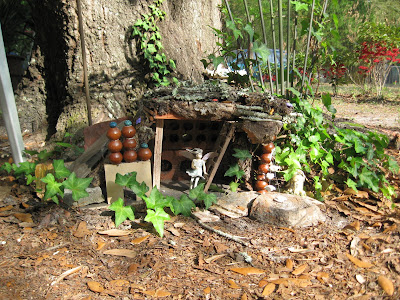 Does anybody remember the fairy house out in the shade garden? THE Wife has given it an extreme makeover and now the resident fairy has new digs. Dig? 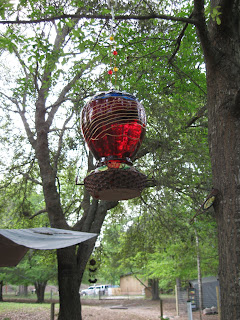 Well, Spring has certainly sprung like crazy here at the Hold; the weather has been wonderful, and all these green growing things are off to a great start. I have more than enough projects to keep me busy this summer, the only restraints being money and weather, but I don't think I'll be idle all that often.

And I'm feeling to good about life right now to ruin it with a rant, so hang in there and perhaps I'll start one during some future episode of The Chronicles of Pendragon Hold, where all the women are handsome, the men good looking, and gnomes that behave themselves find sanctuary. Blessed Be!

Seeing all of the green is wonderful! Thank you for sharing it.

Great news all around it seems! Congratulations on the hard work being behind you for now. We got 7 more posts in the ground for OUR fencing project. AND I got our garden plot ready for the tomatoes I WAS going to put in, before the freeze watch for tonight and tomorrow night. Me thinks I'll wait until Wednesday to plant now. It was a beautiful weekend to work outside. Today it's 57° and blowing the stink off the dog (N20-30) so far.

Have fun running nekid at your fancy!

Something for you... an award

Have fun prancing around nekked!
You are quite the handyman..
the handyman can cause he fixes it with love and makes the world feel good

Enjoy your moment of bliss..there will be plenty of time for rants.

Life is a garden..DIG IT!

Michael, it was an enjoyable read. Glad things are going well.

I so want that faerie house!