I am an avid listener of NPR, one of the very few places where intellect is respected more than blind emotion. I know that most people believe fervently that news is reported with a slant dependant upon who delivers that news, and every time I watch FOX cable news for any length of time I want to believe that. FOX does not report "news" so much as manufactures it. The "tea parties" they have been "covering" is a case in point. These are people who are supposedly protesting the "tax increases" that the Obama administration is imposing, or is going to impose, upon them, supposedly your average joe. 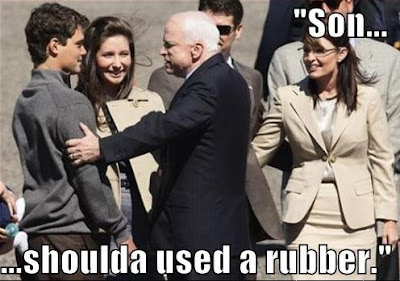 The very people who for the first time in at least eight years are actually going to experience a tax BREAK, are outraged that these godless liberals are going to raise their taxes, take away their guns, force their daughters to have abortions, and all manner of bullshit propaganda that is the hall mark of the Karl Rove politics of desperation. Then you watch the continuing meltdown of the Palin dynasty, as the young, brash (I'll kick your ass) redneck who knocked up Bristol comes clean with the media in an effort cleanse himself of the stain the whole sordid affair has put upon him, as though he was some sort of innocent bystander in the Republican cluster fuck of the century. All the while our president keeps his cool and tends to business as best he can with these conservative pit bull puppies latched onto his ankle, not sure whether to hump his leg or chew on it.

Meanwhile the climate continues to warm.

Yes, first NPR reports the news in a simple and straightforward manner, in a responsible journalistic manner, and THEN you will hear some analysis of said news, and that's where the "liberal" slant is said to come in. When fox reports on something, it is usually reported as "those damn liberals did this awful thing or that awful thing", while NRP will simply report what occurred, then usually allow commentary on what happened by "experts" from both sides of the aisle. Problem here is that if what happened was clearly something that made a conservative look bad, then it's the "liberal media" slanting the news again. The "conservative" media either flat avoids reporting the embarrassing event to begin with or tries to spin it around to somehow deflect the blame of the occurrence back on liberals. THAT is not journalism. It's something more akin to the Bath party news at it's best. So, please, if it quacks like a duck, quite trying to make it sound like an opera singer. It's nauseating.

I can tell you, I am damn grateful now to have not wasted more years than I did pursuing higher education if the result is the like of those who practice "journalism" and pursue politics the way these morons in the conservative movement do. I do not have an advanced degree in physics or biology, yet the logic and simple truth of evolution is quite clear to me. I have no problem separating the bullshit from the evidence piling up concerning global warming; perhaps not having my wealth dependent on planetary rape and pillage lends me a certain clarity of vision and thought. Perhaps my immunity from the outlandish dogma of organized religion has freed me from the fear of their "God", allowing me to approach the questions of life by seeking honest answers.

And no, my liberal friends have not earned a "get out of jail free" card. Sometimes the word asinine best describes the lack of pragmatism demonstrated by those who want to sing Kumbaya, hold hands, and hold no one responsible for the evils we are awash in. New age mumbo-jumbo does not replace Catholic guilt nor does it do a better job of making people pay more attention to their planet and less to some heaven above. Rapture will not solve our problems; recognizing our problems and fucking DOING something about them.........works a damn sight better than denial and putting it off until the afterlife.

Look, it appears that the rapture isn't going to happen anytime soon, so could all of you waiting on it please just shoot your fucking selves and get off our planet? You're really stinking the place up.....really........

I lurrvve NPR. It is all I listen to in car these days since "Clear" channel has taken over the radio market in my area.

Fox News... don't you like how they are bitching about wasteful spending as they waste countless numbers of teabags in an irrelevant protest? Nut jobs.

Where is the American version of the Nuremburg trial..why aren't Rove and Cheney and Rummy and all those asshats who drove the economy into the ground and created a global nightmare on trial?

Why isn't the Media hounding these bastards and doggin' them? Why do they get to slink off to some right wing think tank/PR Lobby? They should be getting raked over the coals every f*cking day!!

I suppose that it is because the Media turned into press release personalities and all of the news outlets are owned by the same corporations that profited from the Bush years...cozy little circle isn't it?

Seriously, where are the trials?