The sun settles into a golden evening here at Pendragon Hold. I watch the rednecks racing their pickups down the dirt road still muddy and rutted from last night's rainstorms, wondering why humans can't seem to get from point A to point B without all the juvenile drama. All over the landscape is littered with fresh green leaves blown off the trees by today's high winds, joining the dead branches liberated from same said tall giants. This is fresh, clean smelling day in the life of two pagans living on the outskirts of Americana.

I, your run-of-the-mill homo sapiens, have been laid low by a mere pygmy goat. Having replaced the entire perimeter of the goat pen with high-quality woven fencing, I thought that I had put an end to her little amazing escapes........only to turn around while working in the yard to see a very happy-go-lucky goat on the mound where she shouldn't....hell....COULDN'T be! I put her back. I examined the pen all along the wire. Nothing. No breaks, no space beneath, no sign of an escape route. I go back to work. She does it AGAIN! I put her back. I examine the gate more closely. Maybe somehow she could have gotten up and over the open top of the gate or maybe even thru the bottom held shut with a bungee cord. I find myself a bent stick and shove it between the gate bottom and a board I have across the bottom. I go out to the shade garden and sit and I watch. 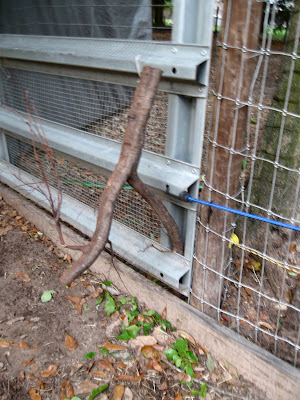 Sure enough, little Ms Houdini strolls up to the gate, puts her head down, and proceeds to (attempt to) bulldoze her way through that gate bottom, a very tight squeeze indeed but I have come to accept that these guys can cram alot through some very small spaces. MYSTERY SOLVED! The stick kept the bottom of the metal gate from bending outward, putting an end to her magic act! Give a human long enough, and he can outsmart even the smartest ungulate!

The newly replanted tomato and pepper garden is off to a good start, and the the terrace garden is doing us proud. But, my real pride and joy right now is the clover seed I spread on the mound last week which is now sprouting. Hopefully, this cover crop will thicken up real good and provide a good forage for the goats as well as improving the condition of the sand with it's nitrogen-fixing talents. The clover on the mound is New Zealand White, but I also have some Mammoth Red I plan to sow in the garden area come fall to improve that area for future crops.

I have two major projects left for this summer; replacing the property fence, and building the chicken coop. The fence HAS to be replaced due to the damage from drunk redneck neighbors and goats who constantly push the envelope. AND, in our quest to be as self-sufficient as possible, raising chickens will help in so many ways, including healthy, organic free-range eggs, meat, and garden pest control, not to mention the rich manure for the garden. I have no need whatsoever for the unnatural poisons offered by the chemical companies, relying instead on nature's way of doing things. Even now, farmers in India are finding out that the increased production made possible by super-seeds, chemical fertilizers, pesticides, and herbicides have come at a now unsustainable cost. All this stuff is expensive, and the water table is dropping due to the insatiable thirst of these crops for water which is being used at ever increasing and unsustainable rates, not to mention the poisoning of the earth with all these chemicals. Science is not the real problem here; it's the WRONG kind of science, and the evil influence of the profit motive.

OK, as usual, this is days later after starting this post and I still haven't gotten it posted, but it's a lazy Friday afternoon and I have plenty of time to finish this up and get it online. 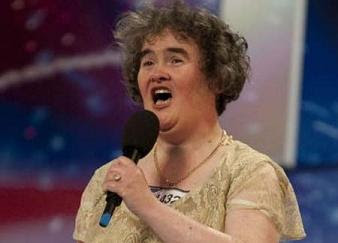 Have any of you heard this remarkable lady who showed up on "England's Got Talent" (Remember our OWN "America's got talent"?) and blew the socks off everybody who heard her sing? Simon Cowle of "American Idol" fame is also on this panel of judges and even HE was effected. If you haven't seen the video already, you MUST. This "not-so-beautiful", rather salt-of-the-earth Scottish woman of 46 years walks out on stage and everybody is rolling their eyes, wondering what horrible sounds she's going to inflict them with, only from the first note, she astonishes everybody with the most beautiful voice most anybody has heard in a long time. The audience was on their feet, applauding her through the entire performance. It was indeed a humbling experience. AND, on top of all that, it turns out that way back in 1999, this same woman recorded a version of a song called "Cry me a River" that is equally, amazingly good, only nobody really noticed it, as it was included on a CD recorded for charity. You can hear both of these songs on YouTube. So go there, already!

The weather today is just fantastic! THE Wife has had another bout of shoulder and neck pain that required a visit to the doctor for shots and a day off from work, so she's been here with me today relaxing and trying to recover. It's a very pleasant 74 degrees with steady breezes that make the trees dance and the wind chimes play a symphony, and the birds are lending their calls to the music of nature.

Tomorrow we will be having company over for dinner and wine and whatever might come of sitting around a fire in the shade garden.

I'm sorry these episodes have been so few and far between, but since I stopped ranting about all the horrible things we do to each other, I haven't had alot to write about, since life around the Hold has been peaceful and relatively uneventful. Actually, I am rather appreciative of the fact that I haven't had to report much in the way of hardship, and I am NOT going to complain about that! I fully realize that misfortune can come out of nowhere and bite us in the ass, so I am going to fully enjoy and appreciate the relatively good times we now enjoy, knowing full well that our fellow citizens all over this country are not doing so well, wether it be foreclosure of their homes or loss of their jobs. I ask of all of you to support our talented new President and give him the support he needs to get us out of the mess that last cluster fuck of an administration left him to straighten out.

That's what's happening at the Hold! Blessed Be!

My dogs and you goats.
They managed to get through palisade stell fencing for crying to Anubis!
I've just added cucumbers to our tomato-pepper-garlic-rocket-beet and basil garden. Got some ecinacea in the seedling trays, too. Wish I could have livestock.But. Dogs.Sigh.
I suppose I'd rather have the companions which I can't eat, but all the same...blessings on all at Pendragon hold, including the goats, and here's hoping THE wife feels better soon.
Love,
Terri in Joburg

Speaking of rednecks, we had to follow a truck from our home to the grocery store belching out great plumes of thick black smoke. I'd have punched him in the face if I could. Even the 18 wheelers don't spew so much smoke into the sky.

My yard is full of clover and tiny purple flowers right now. I look down the street and realize our yard is the only one that has been blessed in this way. I comment on that to my husband and he says "that's because they're weeds." Hrmph! Some people just don't know a blessing when they're looking right at it!

Susan Boyle is incredible! I cry whenever I listen to her sing. A pure voice and a seemingly sweeter spirit I don't think I've ever witnessed.

Glad things are mostly well at the Hold. Sorry to hear that THE wife's neck and shoulder are acting up again though.

I love you too, man, and friends don't let friends rant. Keep the good news coming! By the way, have you seen the movie?