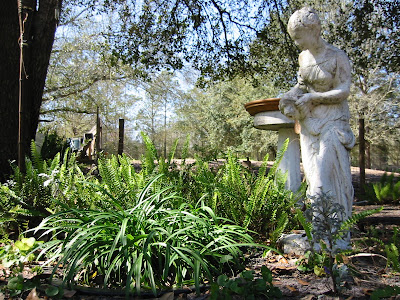 Welcome to another lazy weekend here at Pendragon Hold, that little redoubt of pagan peace out on the edge of suburbia. No neighborhood association here, my friends, we'll sport a fine-trimmed lawn when hell freezes over.

THE Wife has finally received her botox injections, a procedure involving very long needles and a toxin once responsible for millions of deaths during the middle ages. Imagine harnessing the grim reaper himself in order to look young forever! Only in this case, it truly is a treatment of last resort for my poor darling lady, who suffers from a chronic injury to her Brachial Plexus, a gang of nerves in her shoulder that in all probability was over-stretched and injured in an auto accident/ whiplash injury a few years before we met and married. The botox deadens the area in question for months and sometimes even years in duration, allowing the muscles to perform normally without the confusing signals it receives from the brain along the damaged nerve pathways, trying to tell muscles to pull or push with no rhyme or reason, resulting in aggravation and inflammation and chronic, ever increasing pain and misery. She received her injections Thursday, and already the pain is starting to ease off, with the full effects beginning to tell in about a week. One side effect, however, is that the entire shoulder area tends to droop dramatically, putting a strain on muscles and joints, forcing her to wear an arm brace until the proper tone returns to the area. Hey, everything comes at some price; at least it doesn't make her bark like a dog or contract a weird sort of cancer.

"Houston, we have TOMATOES!" Yep, folks, save some new plague or hailstorm or invasion by bugs, we should have a bumper crop of 'maters this year, along with a nice variety of other veggies. The clover has covered the septic mound in a nice carpet of green, and there is even a whole spread of clover growing all on it's own in the tomato garden area, I believe from dormant seed brought back to the surface when the area was tilled. I'd forgotten that I must have planted a crop of clover in that area years ago when preparing the first gardens. There are even rouge squash or cucumber plants sprouting up here and there, again from previous gardens. Reminds me of Jeff Goldblume in Jurassic Park......"Life will find a way...."

I hear thunder in the distance, and THE Dog is cowering at my feet as I type this post. Yea, him, my brave and loyal companion, Shiloh. Hey, we all have our terrors; some otherwise bad-ass guys are afraid of clowns; Shiloh is afraid of thunder storms. The garden, however, is going to LOVE this storm and the pure H2O it will deliver.

We just watched the Bill Maher movie, "Religulous". It was OK, but it didn't tell me anything I didn't already know, that organized religion is the pox of mankind, the one reason we will NEVER achieve peace on Earth or Justice for all people. Yes, I know, many of you will protest that you are good people and I shouldn't judge, but, c'mon people, when was the last time you saw a horde of atheists banding together in efforts to deny people something or spew hatred? And when was the last time that decent, kind, actually-Christ-like peoples picketing against a fundamentalist group that was displaying egregiously unchristian behaviors? Yea, I thought so. No, I do not personally lay claim to any sainthood due to my personal spiritual beliefs, because I am either a decent person or I just flat am not, and no religious affiliation is going to make me any better than I choose to be. Apparently, the threat of hellfire hasn't changed the bitter, hateful attitudes of a large segment of the Christian, Jewish, or Islamic population, or the myriad flavors thereof. Judge me by my actions, or shut up about it. God ISN'T on my side OR yours.

I would like to send some good thoughts out to two blogger friends who have decided to retreat from their blogs for awhile if not for good. My friend Buffalo, a brother-in-arms in many ways, has put "Buffalo's Ruminations" to pasture, and my good Lady friend Kindness has taken a sabbatical. Both of these people have been a part of my life for years now in their own special ways, and I am already missing them terribly. However, they cannot escape the place in my heart within which they will always reside. I can only hope that when I put MY keyboard out of it's misery, that I will be missed half as much, for then I will have earned some measure of validation for all the keystrokes I contributed to this grand cacophony we call the web. This is truly what I call the "web of life".

THE Local Daughter (formerly the Resident Daughter) has come to wash her laundry and dine with us, bringing with her a jug of Pina' Colada mix and her knack for cooking great salmon patties. Summer rains outside, good company within, we are indeed rich people. Filthy rich, if you ask me.

Just noticed your "visited by" ticker.. seems that if you did retire your keyboard (and I sincerely hope you won't - at least not for awhile), you'd be missed. And I'm not just saying that.

I do hope that the botox treatments work out well for THE wife. Terrible decision to have to make.

I, too, miss Buffalo. And for sure, I'd be missing you if you came up AOL. Please stay around. I love the updates at the Hold.

I've got tomatoes growing tall tall tall, but no fruit as of yet. In fact, I need to get out some stakes because I noticed last night that my cherry tomato plants are bending over from being so tall. I DO, however, have baby jalepenos! Hallelujah! I can wait to cut one of those babies up. Yum!

Glad The Wife is doing better, and good for the Twin, for bringing goodies!

How lucky you are. Your life sounds like Nirvana right now...
bb
dawtch

Hey! I went to prune and stake up my tomatoes last night and YIPPEE!!! I've got flowers, and fruit! Even jalapenos!

Sounds like you were having a good day! Hope the good days keep coming.