Murder Most Foul on the Fourth of July

Today's post was meant to be published ON the Fourth of July, but I did work this holiday weekend, and I wanted to spend a bit more time polishing up this post, as it includes news which is painfully personal. It is several days late and in two parts.

Today is the day that we, the citizens of these United States, celebrate the most precious thing we possess.....our freedom. Yes, in many ways, we are not free, and never will be, in the strictest sense of the word, for THAT kind of freedom requires that each and every person possess common sense and a kind, loving heart. Many, if not most of us, do not possess these things, although, again, many of us think we do. However, thanks to the remarkable foresight and critical thinking skills of a select group of 18th century insurgents, we have a document that has provided us with a blueprint from which to build the freest and most powerful nation this Earth has ever known. This document is figuratively stained in the blood of selfless men and women who answered the call, again and again, to risk the greatest sacrifice, and again and again, paid that most dear price for our freedom.

Every four or eight years, one political party or another will attempt to tamper with this document, usually in the name of morality or safety, and in doing so threaten the very foundation of all our freedoms, for the sake of knee-jerk righteousness. These are the enemies within, which we who take our oaths swear to defend ourselves against. They usually rally us around some perceived threat from without, and in the fog of our fear profit mightily at the expense of our sons and daughters, until such a time that even our friends wonder what we've become.

And so on this day, I ask all of you who deem yourselves the guardians, as well as the beneficiaries of this great republic, to remain ever vigilant against those who would use fear, intolerance, and greed to undo what generations of Americans have endured to build a more perfect union, for all these two centuries and more.

Tell them to move to Russia, where the press keeps it's mouth shut, or else. Or Iran, where the state tells you who and how to worship. Or Somalia, where no one pays taxes except passing ships. 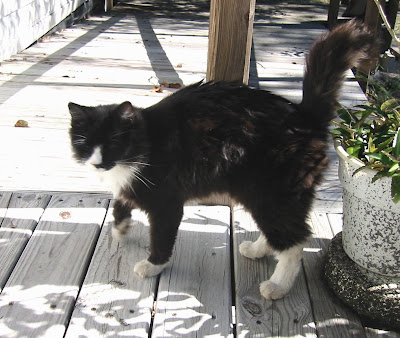 This July Fourth has not been very festive here at Pendragon Hold, for yet another tragedy has befallen us. Our dearly confused yet loving and loyal outside cat, the not so male feline we named LOLA, has been..........for lack of any better description......

THE Wife called me at work to inform me that she had just gotten sick having watched two neighborhood stray dogs attack and kill our cat, cornering her near our neighbors house across the lane. They then took her body with them and wondered on back down the road towards their own homes. Of course THE Wife was to afraid to follow them or try to intervene, as vicious as these two somewhat large dogs had proven they could be.

While I had to remain at work, fuming, THE local daughter came over and together they managed to backtrack and hunt down Lola's remains with the help of a lady living near where the dogs apparently lived.

While fireworks painted the skies all around the Hold, we placed our friend on a huge mound of brush and limbs we had already collected for a bonfire and sent her /him on his/her way to Summerland, where nobody expects you to catch mice or explain your gender or share your litter box with other cats. Of course, we played the song "Lola", by the Kinks, her namesake song.

Monday I will call animal control, and I will either get satisfaction through them, or I will get satisfaction, period. These creatures will NOT kill again if I can help it. I've heard to many horror stories of young children being attacked by dogs this way, and it won't happen on MY watch.

One morning, over twelve years ago, when THE Wife and I were living in another of a long succession of apartments (as rents would go up, we would be forced "on down the road" into cheaper and less desirable digs), I opened the front door and in walked a black and white long haired cat, pretty as you please, as if to announce, " hello, I'm living here now, you can feed me if you like..". This cat had a definitive feminine air about it, and it wasn't until we took it to the vet that we discovered that it had an open wound on it's belly, a broken tail, and yes, balls. So, we had her sewn up, vaccinated, and we named him/her LOLA, after the star of the Kinks greatest hit.

LOLA reigned as queen of our households, including the Hold, until the fateful day that we adopted Shiloh and LOLA rebelled, refusing to share HER/HIS domain with a CANINE of all creatures and peeing all over the house. Out she went, and LOLA, former prima-donna of the Pendragon Clan, became our outside cat. We fed her and she remained close, perhaps wondering across the lane to the neighbors yard on occasion, but she never lost the sense that this was home. As she/he grew older, LOLA became something of a ragamuffin, thin, scruffy, and lazy as all get out, lazing stretched out on the sand without a care in the world, ready to react on a moment's notice to pounce on any squirrel my deadly pellet gun might dispatch, yet was never the kind of cat to expend that much energy hunting on her own. In so many ways, LOLA was a rather worthless cat, but she was OUR worthless cat, or rather we were HER loving people, to the very tragic end of his/her life. We will miss him/her/whatever.

Blessed be you all.


P.S. For those of you that are new to The Chronicles, and those who forgot, LOLA was the cat with the starring role in the header of "Dances with Leaves", which you can visit and view via the link at the top of this blog.

Michael, I am so sorry for your loss. I can't imagine how difficult it has been considering the circumstances.

My thoughts are with you and yours.

I'm so sorry to hear about Lola. Gosh, that's just terrible. That just makes me sick too.

If I were you, I'd dispatch those dogs with a big slug to the head. If we were in your situation, I'd probably try the authorities first, then DH would settle it himself with his gun. Just be sure to bury the bodies and no one is the wiser.

I've never commented before, simply stalked in silence, but I had to write. I'm so sorry for both of you at the loss of your friend, because our pets are definitely friends to us with the fun/comfort they provide. BUT...we cannot send our angry thoughts toward the dogs for simply behaving like dogs. The danger is certainly there for a small child and they should have been contained in their yard or on a leash (like anyone in this town owns a leash)! That kind of negligent owner probably doesn't feed them or socialize them properly either...were they hungry? aggressive from abuse? It's a sad scenario for all the animals involved. Again I'm so sorry for you both.

Sharon, thanks for your input. I do not direct my anguish so much at the animals involved in a vengeful mood as much as I do a practical one. We put down rabid dogs and other animals not as punishment but for our safety. We "put down" our fellow human killers most often times for vengeance sake when, again, it really should boil down to practicality; we need to remove murderers from our midsts for safety's sake. These dogs strayed far from their home territories and attacked my friend on HIS home turf (or very close to it), without provocation, which at the very least speaks of poor domestic socialization by their owners. Attacking other animals is not "dogs acting like dogs" any more than bullies attacking weak kids at school is just "boys being boys". First off, these dogs are not being contained to a fenced in area, nor are they being kept on a leash; they are being allowed to roam free, which is basically against the law to begin with. We have animals escaping their yards all the time, as is their natural inclination, and as long as their escapades remain harmless adventures, and they are returned to the control of their owners, like mine has on occasion, then no harm done. No effort towards control is being exercised by their owners, making them BAD owners, and their animals have already demonstrated themselves as a danger to other people's pets. Thus, as a practical matter, the owners must be sanctioned, and their animals removed or better controlled, or it is within my rights as guardian of MY family to defend them, and I will not hesitate to do so, again, not for vengeance sake but in defense of that which I am responsible for.

Had it been a human attacking my wife, though....well.....I am human. Fuck a bunch of practicality in that instance.

Blessings on Lola - may Bast guard and guide him.

Blessings on you, too, Michael - not least for not using the 'pitbull' word.
Personally, I'd be strongly tempted to off the 'owners'.

I agree that the dogs must be dealt with on a purely practical basis. A successful cat kill will only encourage them to attack other pets. Yes, they were behaving like "dogs," but not like domesticated dogs. Well-trained, well-socialized, well-cared-for dogs do not kill cats.

Nothing I can say except I'm so sorry. So very sorry. .