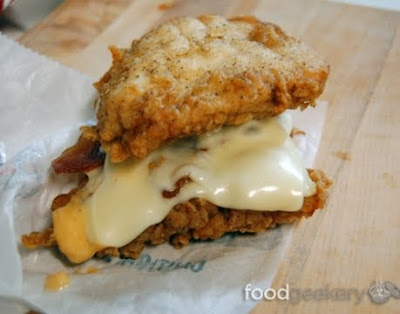 KFC (Kentucky Fried Chicken) has announced a "sandwich", distinctive in that the bread is replaced by two slabs of fried chicken. Between these two hunks of fried meat is a lot of cheese, bacon (cholesterol, anyone?), and "special sauce".


It's like America is being presented with an IQ test it can't possibly pass.

But hey, it's a free country, right? Here, we are free to load up on the calories, the fat, and everything else we can clog our arteries with and expand our spare tires with. Here, we are free to go somewhere else for our wireless service if we don't like all the fees and surcharges they love to spring on us, all made legal with two year contracts, of course, and since ALL the wireless providers screw us in the same fashion, there really ISN'T somewhere else to go, but hey, we're still free to "go there", right? Then, there's the freedom to pay cash for our medical bills when our "health" insurance companies catch wind of our health perhaps failing us, prompting them to cancel our policies before we can actually use them, even if we'd been paying premiums for decades and never even had a sniffle. And THEN we have the audacity to present ourselves to the emergency room with problems brought on by obesity and poor diet! Shame on us for doing what all those advertisements on television urged us to do!

I love the fact that I put my ass on the line for this country, only to discover many years later when I grew mature enough to take my attention off pop culture and high performance cars to notice that most of us hate each other with a passion. I mean, we MUST hate each other if we honestly think that half of this country is out to GET the other half, like forcing them to do things like have affordable health insurance, decent wages, worker protections, legal representation, and decent housing and nutrition. We obviously don't think that "other half" of our country worships the right god in the right way, and thus believe that "we", the ones "right with god", should be able to teach EVERYBODY'S children the word of god in the public class room and avoid exposing them to atheist propaganda like evolution and climate change.

During World War Two, it was obvious who the bad guys were, and NOT because we as the "good guys" actually had a morally superior culture. No, we might not have sent our Jews to the ovens, but we certainly tried to keep our negroes on the plantations for the longest time, and had a conniption fit when those damn liberals made it possible for the Tuskeegee airmen to protect all those bombers from german fighter planes. We didn't chop off the heads of our enemies with swords like the Japanese did; we simply fried two whole cities worth of those yellow bastards with the atomic bomb. We as the world's leading democracy were only slightly ahead of the curve when it came to human and civil rights, and it took a very, very long time for us to actually come to grips with the part of our own constitution that said "ALL men are created equal".

Seventeen percent of Americans believe the Sun revolves around the Earth. A third of Americans can't name all three branches of our government. I would venture to say that many of these same people are the ones shouting at their elected representatives during these town hall meetings. We call this a representative government, only I wonder sometimes who is being represented and why, much less how. Some of these people, like Michelle Bachman, amaze me in that not only were they elected to public office, but that they display many of the symptoms of brain death. For all the millions of dollars being spent on "higher education", I honestly wonder if anybody is really getting their moneys' worth.

So, in retrospect, I didn't actually "serve" my country, I simply kept the Soviets at bay long enough for them to crash and burn. I promised to serve and protect the constitution of the United States of America, from ALL enemies, both foreign and domestic, and when all was said and done, I and all those others who took that oath with me failed utterly. Many of us voted for people who had no real idea what our constitution stood for, and we allowed elected representatives to walk roughshod over a concept that took centuries to evolve into what our constitution and way of life has come to stand for. I would like to think that we got our act together when we elected Barack Obama to the highest office of our land, and yet half of us continue to act as if we never got past the sixth grade, and bend over to willingly service those who wish to, putting it bluntly, screw us in the ass in any way they think they can get away with by playing on our basest fears and insecurities, as well as our insane ignorance and lack of critical thinking skills. Now, let me be honest; I like sex, even the kinkier flavors of it, but I never signed up for rape.

I wonder if we need to go to requiring any candidate for President to have served actively in one of the branches of the armed forces? But...then again, that's probably discrimination eh? At least one who has served really understands the "serve and protect the Constitution of the United States of America, from ALL enemies, both foreign and domestic" part and might actually do their job remembering this. But that is probably impossible, as we don't have a draft anymore, less and less of our elected officials have served, and women want to be president now.

Have you seen the YouTube video clip of the town hall meeting with Congressman Brian Bard of Clark County, Washington? There is a segment going around with a guy who uses sarcasm so eloquently. It was pretty good.