The Eclectic Pleasures of Rocky Horror, Mac Mini's and the Down to Earth Agony of Unemployment Examined in Black Light 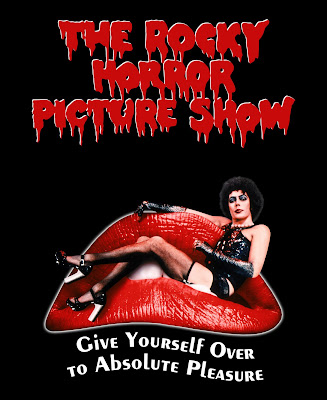 I know it's been awhile since my last post; it seems that your humble editor has been lax to the tune of maybe one post a week lately. It's just that a sort of malaise has come over me lately, attributable perhaps to this sense of doom that has it's grip on my inner core. This 2012 bullshit is hard to get out of my system, so hard to discount entirely, no matter how logical I think myself to be. Well, whatever, I'm sure I will get over it eventually and get back to living life as if life goes on forever, much the same attitude that teenagers seem to have. I miss being a teenager, only NOW is the time I should have been one, considering all the things teenagers seem to get away with these days that teens in MY day never even dreamt of getting away with..........sigh.........

The whole purpose of life here at Pendragon Hold of late has been the planning of the Rocky Horror Picture Party that the wife dreamt up. The whole success of this endeavor will hinge on several things, one being that SOMEONE comes through with our need of a video projector to play the movie on the back of the house with. I scouted out all the local rental stores around here in hicksville and it seems that video projectors are NOT a hot item in the rental market. I sure as hell can't afford to simply buy one, not at an average of $600 a pop, especially considering that this might be the only time I'd EVER need to use one. Yes, I know, the other alternatives are big screen televisions, which of course we would risk destroying with all the things you throw at at screening of Rocky Horror. What could they do to a white sheet taped to the wall of a house? ANYTHING THEY WANT TO!

I also am hoping that all the nurses and other folks of the medical persuasion will attend the party as promised. Very few of them even know what Rocky Horror is, but many of the virgins DO seem intrigued............I might even get my boss, bless her brave heart, to come and provide all of us with blackmail fodder!

On to other news, which is not all good, unfortunately. THE Daughter, the ex-evil twin who got screwed by her last week-long employer, is still searching frantically for a job; ANY job that would at least pay the rent. I think it really sucks what they did to her, and if I had my druthers, I'd take any excuse I could find to sue their sorry asses for hanging her out to dry like that. This girl excels at just about anything she takes on, and she is one of those few women who truly understand what a work ethic is. So, I am asking all my pagan fans (and even those of you who think there's an angry white man in charge up there on cloud nine) to craft some good spells or utter some late night prayers in favor of our little girl getting back on her feet real quick. Yes, we are fully prepared to take her back into our loving embrace until she can recoup, but DAMN, she was SO happy to be making it well on her own! I don't blame her for being so upset in that regard at all; I fully understand the feeling of having to depend on others when you shouldn't have to.

AND, I have finally saved up enough green backs to get a replacement for this venerable old iMac G-5 of mine which has served me so well for all these many years. I would be happy to stick with her till the mother board finally bit the dust if it wasn't for Apple moving on to Intel chips for their computers. With this release of Snow Leopard (OSX 10.6), Apple no longer supports the old motorola architecture, so I can't run many of the new applications which are Intel-only. Yes, she still surfs the web fast enough, but there are plenty of things I want to do that I just can't do with this now somewhat obsolete old beauty. Anyway, she is going to be replaced by a refurbished Mac Mini, a nice little 2 ghrz Intel Core Two Duo which I will have to perform some surgery on to upgrade the slow, small hard drive and increase the memory, which will end up giving me a machine which will run circles around this old G-5. I'll be pairing this compact little machine with a nice, reasonably priced 22 inch wide screen monitor which is an improvement size-wise over the 17 inch screen built into my iMac. All for several hundred clams less than even a new refurbished iMac would have run me, which would take me close to forever to afford. Here's to another five years of virus-free computing!

Yesterday I got a flu shot; just the regularly scheduled flu preventative, NOT the vaccination needed to prevent that nasty new bug, the SWINE flu. Being so adverse to needles that I am, I am happy to report that I didn't even feel this shot, so talented was the lady who nailed me! Hopefully, the staff will be up for the Swine flu shot the first week of October, being on the front line as we are in Critical Care. Funny thing is, I might even have a natural immunity to the Swine flu, considering that I was one of those hapless military members who got shot up for it the first time the Swine Flu raised it's ugly head, back in the early seventies. Can't be sure, tho, so I'll be happy to get the new shot.

Right now we're watching something about Pink Floyd on VH1. Did I mention I love satellite TV?

As for politics, well, let me sum it up with this: There are now two Americas; the one we grew up with and the one that a whole white-trash, right-wing, racist and IQ-challenged segment of our population would want to see happen, something like an Iran with a chewing tobacco mentality. A place the Taliban would think of as being over the top. A place that corporate America masturbates itself to sleep every night just thinking about.

The most obvious and logical solution to our present day dilemma is too go ahead and complete the job that the Confederacy tried to perform back in the 18 hundreds; split the nation in two and give them what they want, and preserve the union with those who actually understand what the union has always been meant to be from day one. Just let all the ultra-libertarian/Republican/Conservative pasty white people move South of the Mason-Dixon Line, and the rest of us honest, educated, caring, intelligent, forward-thinking genuine Americans will stay North, always ready to accept the escaping slaves, the newly enlightened, and the persecuted free thinkers that discover the hard way what living in "Dixie" really amounts to. Of course, we will require them to once again raise their hands and swear to protect and defend the REAL constitution of the United Free States of America, from ALL enemies, both foreign AND domestic, or just go back and wallow in some more white power and corporate butt-fucking. And NO, we will NEVER send one penny of "foreign aid" to them no matter how thick the smoke of hatred and intolerance becomes as their new "nation" becomes a new fascist regime that rivals the old reich and the fires begin again.

And we'll keep the nucs, thank you.

Until I get off my lazy ass and post again, this is Alex Pendragon, "THE Michael" signing off.........

P.S. My favorite "Kind Lady" is back at her blog, thinking that maybe it would be nice to return to blogging...........so, if you are as much a fan of "Kindness" as I am, get your ass over to her blog and comment, and comment often. Our world is MUCH better with her in it.

Oh, and let Anne Johnson know that she has more than ten loyal readers. She's that amazing creator of "The Gods are Bored", as IF you didn't know that.........

It seems I always end up in the conservative south. Try being surrounded by all those right wing religious conservatives and being one small voice in that crowd!

the party sounds WONDERFUL - have you tried your local library - they might have a projector available for rent?

Rocky Horror is SO much fun. I remember WAY back when dressing up in the corset, whip and stockigns to attend midnight showings ... alogn with toast and the rest of the pharaphenalia needed .. so much FUN.

I'm catching up on your posts in reverse order. Should be interesting like reading in a mirror.