"I've just checked in, to see what condition my condition was in…." 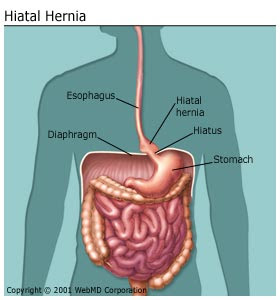 OK, I went to my family physician today, a white-haired gentleman I assume is older than me who harkens back to the olden days when you were ushered into an exam room at 10:30 for a 10:30 appointment and he spent as much time with you as was actually called for. I am truly thinking of making an offering to each and every God that mankind has ever worshiped or shot a game of pool with in thanks for the millions of years of evolution that resulted in this man being here, and for me and my wife, of all people. I dread the day he retires.

After discussing my pain and agony (OK, fine, my disconcerting discomfort bordering on pain) in great detail, and running a twelve-lead EKG (which looked just fine), we both agreed that the symptoms so far seem to point at either a hiatal hernia and/or an ulcer, either one perhaps associated with an increasingly evident case of GERD. So, on the 13th I get to go to the hospital and endure a barium swallow/abdominal X-ray, and tomorrow I get lab work (including a LONG overdue check on my cholesterol) done. It stands to reason with a perfectly normal EKG and the fact that I would have had a nasty heart attack by now with this duration of pain, I probably don't have a cardiac condition, which hopefully the x-ray will show. I know it sounds silly to be rooting for a defect in my diaphragm, but it sure beats the alternative. He also prescribed protonics (a sort of generic Nexium) to treat and rule out the GERD which might have also caused this pain. If my pain goes away entirely by the time I see him again AND the x-ray comes back negative, then BINGO on the GERD.

Having dropped off THE Wife at her job, I had time to burn before my appointment with my Shaman, so I sat in the car listening to the radio and playing games on my iPod Touch. So, of course, I go to start the car and……….clickclickclick……..NADA! Damn battery was almost drained! Had to get a jump from a nice lady. So, enough of this crap, time to replace this battery which is only just over two years old, only this time I keep the receipt! Also I bought one of those emergency jump batteries just in case.

Tomorrow after the vampires have their way with my delicate veins, the dog gets it……..a B A T H that is. I can't just SAY B A T H because he hates the idea and I don't want to upset him. I also need to clean the aftermath of our party off these wood floors, but I think I'll save that for Friday. It's hard being a househusband, I tell ya……he he.

Michael, I'm glad you're pursing this; whatever it is, I agree that at this point, it hopeflly is NOT the heart. Ulcers suck. hernias suck. but they sure beat heart issues!

here's hoping they resolve this quick. Chronic pain is exhausting.