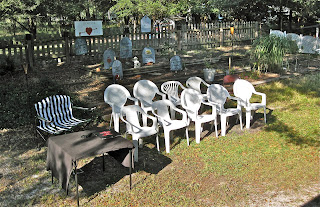 Imagine you had designed the world's first party zeppelin, capable of carrying more than a dozen people easily, worked diligently to make it operate smoothly, even painted it in the wildest and most attention-getting colors, and on the day of it's maiden voyage, FIVE people TOTAL show up to experience this wonder of alternative aviation?

Thus was our Hindenburg, The Rocky Horror Picture Party. 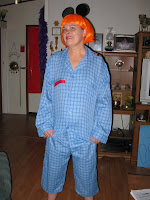 You should see this Good Lady Partner of mine when she gets her teeth into an idea. It becomes an obsession and her entire life revolves around it. You would be hard pressed to meet anyone so creative and energetic when it comes to plainning something like this on a shoestring budget, determined to make it an experience for all involved. Don't even include the stress I allowed myself to experience trying to aid her in this quixotic quest for "par-tay" nirvana. (We are, after all, baby boomers, that strange new generation that INVENTED all-hell-breaking-loose.)

Her and the Dotter (that's my new name for the ex-evil/once and again resident twin) lovingly put so much attention into my costume as the biker/bad boy Eddy that it was entirely believable if you have an good imagination. THE Wife posed as Columbia in her pajama scene while THE Dotter made an excellent Maid Magenta. Trust me, if you knew anything about Rocky Horror you'd understand what I just said. 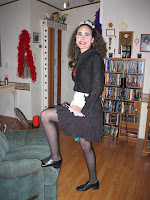 Despite my best efforts I was not able to procure a video projector and had to scale back to our old 26 inch analogue television set, which I hooked up to an old but very capable stereo receiver made obsolete by the 5.1 surround sound era, our DVD player, and a pair of medium sized speakers I picked up real cheap at Radio Shack on sale. Truth be told, this setup served it's purpose quite admirably.

So, in the back yard, with torches and lanterns blazing, white plastic lawnchairs aplenty, and lots of props to go around, we watched AND performed (THE Wife most learnedly and enthusiastically) the musical/movie/mayhem which is The Rocky Horror Picture Show. Hot dogs, toast, bird seed (instead of rice) went flying and streams of water from water pistols wet our newspapers, and a very few hearty souls made bold attempts to do the Time-Warp (an insane dance for you uninitiated). I would not be surprised if neighbors fertively watched this THING going on from behind curtained windows with one finger on the 911 button.

TWO of my co-workers attended while THE Wife managed three total. This was out of a much larger total that was promised. I do make allowances for a couple of my no-shows due to scheduling conflicts that could not be overcome, but it was somewhat disappointing nonetheless. Thus, I want to present THE Michael's Most Sincere Appreciation Award to my two brave and noble angels of mercy who came, after having just finished a twelve-hour shift, no less, to attend our event. I hope you two had as much fun as you indeed appeared to be having, even as drunk as we were all becoming! Also, both I and THE Wife want to thank her co-worker/crazy girlfriend for her participation and aid in making this thing work as well as it did. We hope your hang-over is brief and memorable!

So, no, our hapless diregible did NOT crash and burn, and those that chose to ride it had an experience they will remember for more than a week, we hope! We DO have some photographic evidence of the crime, but we have decided that no one we lured to our lurid event is worth quite enough to blackmail. So, we will both have to return to work and continue to earn our living the old-fashioned way.

As for now, well, it's Sunday morning, the back yard looks like Normandy Beach a week after D-day, and there is a TON of un-eaten party food to deal with. Perhaps I should ship it off to those starving children in China our parents told us about…….

This is how you find out who your true friends are.

Gosh, I am sure sorry to have missed the party. Sounds like all had a great time regardless of the low turnout. Sometimes...less IS more!

Sounds like Mini Me's 16th b-day party - few showed that were going to be there (for all variety of reasons) but she had a fab time with the ones who were there. If you can't be with the ones you love... love the ones you're with.