My Clean Bill of Health Well, I've had my follow-up with my Shaman (genuine MD) and according to the test results and my response to the Protonics he prescribed, I was inflicted with nothing more than a bad case of GERD which is being successfully treated with the drug; i.e. I have had no more chest pain. DAMN I'm healthy! loll

However, the sinuses are acting up yet again and like the amnesiac idiot I am, I totally forgot to address THAT problem with him. But, THE Wife has an appointment with same said physician tomorrow and hopefully I can remember to ask him for some relief THEN. (Ties string around every finger).

The referendum over when and where my Clan is going to have their reunion is still ongoing and slowly gaining some consensus. We are wavering between a meeting in Texas, in Florida, or on a Cruise ship. AND we need to decide between roughly March of next year and June, depending on where we do this. Hopefully we'll get this nailed down before to long. I am so looking forward to seeing all my cousins again or for the first time. 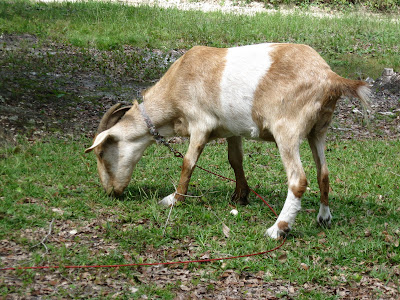 I don't know if I mentioned this earlier, but our "big" goat, and self-styled leader of the herd, Billy, has been given over to a co-worker of mine who has a much larger piece of property for him to consume. And, believe me, GIVEN the time, that goat WILL consume anything and everything within reach….he he. The main reason I gave him over is that we have tried to bring in a fertile ram to knock up the twins with, only Billy was much to rough on him and he unfortunately may have suffered internal injuries that killed the poor little thing. With Billy out of the picture, perhaps we can bring in another little ram and have better success this time around. AND, I did exact a promise from his new owners that he will NEVER be killed as a meat animal. As of now, Billy has taken over the herd he was introduced to and is in King-of-the-Hill Goat Nirvana. We are so happy for him!

And that's what's happening at THE Hold, this nice warm Autumn day on the edge of suburbia. Blessed Be!