The Truest Measure of HONOR 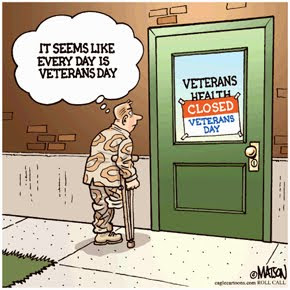 Today is Veterans Day, a day out of a very long year set aside to honor those of us who served their country in one of the branches of the Armed Services. That is a fine thing, yet, as a veteran myself who has never allowed himself to be blinded by blind, shallow, and false patriotism, I consider all the parades and other window dressing to be horribly inadequate when it comes to paying back what we owe this amazing and sometimes tragic population of brave Americans, of all races, creeds, genders, and religious affiliations.

The most egregious (in my humble opinion) transgression we allow these men and women who go into harms way is the way we train them to be warriors. Yes, we are VERY good at creating fighting men and women who follow orders, do what must be done that can and often get them killed, and do it better than any other fighting force this planet has ever known. But what we do NOT do is teach them how to be ordinary citizens AFTER they have been trained to cause harm or kill others in defense of our country. What's really worse is the culture of killer macho we install in our fighting men that does not allow them to show weakness or admit to the psychological injury that their service can inflict upon them. In "this man's army" we equate seeking help, mental or otherwise, with "being a pussy", which is a perfectly pathetic way to demonstrate just how callous we as a society is capable of being. This is a society that acquires its strength from the RULE OF LAW, and untamed aggression, whether that be against a foreign civilian or a soldiers own spouse, is totally counter to that in a sane society. Yea, you might think you are a bad ass, because the Army taught you how to kill, but if you can't put that training into perspective, and return to us able to function in society as a calm, decent, non-aggressive citizen, then we have failed you, and this failure to take responsibility for our warriors is directly responsible for the terrible price our warriors are paying for stepping up and serving their country in times of war.

You MEN out there, or even women, who think that the measure of manhood or macho or adherence to some imagined "warrior code" need to get over your self-centered self and realize that we don't need you threatening your own people with your personality disorders. It's bad enough that we have a generation of "gang-bangers" whose respect for life is so deficient that even children are endangered from their reckless homicidal behaviors. Its even worse that we have soldiers committing suicide in record numbers because they imagine they are worthless as Men, providers, lovers, husbands, or macho-bad-ass soldiers who couldn't handle the violence they were faced with. You "Rambo wanna-be's" really piss me off, and the system that produces you needs to just fucking go away. I want my military to SERVE me, not come back and harm me and my loved ones or harm themselves.

I was lucky. Although I served in a way that I could never talk about, get any credit for, or equate with actually gunning down individual human beings, I had to live with constant danger with blinders on, never really knowing what me and my comrades were doing or what the consequences might be, I didn't have to witness horrific bloodshed such as those who see their buddies being taken out by an impersonal improvised explosive device. My service was not easy, but I was able to deal with it, and came away with a certain amount of pride for having served my country,

Not everybody in uniform these days returns to the bosom of their country, family, and friends without the stench of some insensible horror following them from the battlefield. They truly need effective mental health care, without some stigma being attached to this need. We as civilians would expect no less; why is this not taken for granted for our warriors is amazing.

So, this Veterans Day, please don't just wave little flags at our veterans and think you've payed them off for their sacrifices. You haven't. You might never. But, it would be nice if you would get real and TRY. Let us cry when we have to, allow us to admit to weakness in the face of overwhelming pressures, and for God's sake..........let us be HUMAN.

Blessed be our brave men and women of our Armed Services!

Michael, did you see Bill Moyers Journal last Friday? If not, check out the website.

Thank you for your service Michael. I appreciate you.

I am late to this post but you make excellent points my friend! Steven Spielberg and Tom Hanks are currently making a 10 part mini series for HBO entitled "The Pacific." In the trailer they said they are going to explore this very theme.

BTW... thank YOU for your service as well. Love, Kindness