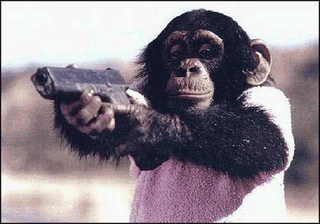 I'm rather rabid about protecting my "rights", while at the same time recognizing that none of us are truly born with any real right to anything. What we actually enjoy, at least in this country, are "allowances". We are allowed by those in power to presume that we can say what we want, do what we want, think what we want, all within a framework of manageable chaos which we call democracy. You need only observe the machinations of the Bush Administration or the Putin Regime to understand that this freedom we take so much for granted is a tenuous concept at best. The right people in the right place will dictate just how free any one of us are to live our lives as we see fit.

I also happened to notice, while I was growing up and learning all about rights and how few of us really understand what they are, that with rights come responsibilities which few of us are aware of or are too lazy to embrace. So, I think I have the right to think and say anything I damn well please, but I also have a responsibility to exercise that right in such a way as not to harm someone either deliberately or by negligence. I WILL fail in this endeavor, but I WILL cling to the defense that I am at least trying. Most people, of course, are not going to concern themselves to much by how "getting theirs'" is going to effect those around them, because a "free" society also tends to be a very self-centered society. You might argue this point, but while you are dragging out your big guns, let me give you THIS broadside. You would think that social evolution would deal with problems as they arise and solve them, rather than create them. Really? Then tell me why, before Ronald Reagan came along, no one used the word "homeless" very much? Tell me why, then, are the mentally ill gunning down people in wholesale numbers instead of being managed by a mental health system that SURELY should have a clue by now as to how to deal with these people, who, incidentally, are simply you and me just one emotional upheaval away? Tell me why, in the name of free enterprise, we seem to have forgotten the idea of national interest, such as keeping OUR citizens employed and off the streets rather than shipping their livelihoods overseas so that third world nations can aspire to be just like us? (Third world nations, I might point out, that hate our guts, and sadly, have every right to.)

We are afraid of each other. So damn intent are we to protect our "rights", we see to it that every citizen has the right to arm themselves, even if we end up arming the very people we are arming ourselves against. It seems we would much rather shoot someone needing our help then to simply help them, unless of course, they have the good grace to shoot themselves once their rampages are out of the way. Then we bath in the media circus that always follows, following the pointing fingers, then going back to our self-centered lives and trying not to think about the next massacre that will surely happen, because, after all, we are no longer our brother's keeper, are we?

I WILL practice my rights as I see fit, as long as the police state allows me to. My practice of rights does not happen to include owning a pristine, green lawn devoid of all life other than one genetically engineered species of grass. It does not include contaminating my water table with herbicides and pesticides and all those other poisons we can pour on a yard. It doesn't include seeing to it that my neighbors are worshipping the right God, or bringing the righteous weight of moral society down upon their sinful heads if they aren't. It doesn't include living my life as though my being at the top of the food chain really means I'm a superior species that needs no regard for his fellow creatures. It does mean that I will keep jacking my jaws, pointing out the obvious, and maybe not-so-obvious, until my turn comes up and I get to die just like everybody else.

Or is that a responsibility?

I couldn't agree more with the idea of "allowances" v "rights". The difference is becoming more and more glaring as time goes by.

Thankfully we are at least enjoying a semblence of the notion that the collective "we" are still sharing. The future generations seem more entitled and concerned about the "I" in we...or am I just getting old and crotchety?

I realise that my Grandmother's generation lived through the depression and suffered together. They grew up saving their money and didn't trust the government. Mow we seem to think that we can trust the government to take care of us? HA! Why? Look at how poorly they manage our money? They spend it on building weapons instead of hospitals for the 80 million aging Boomers and their parents who somehow refuse to die :)

We North Amercians do have more freedom than most but we waste it. oh well. I look forward to eating my bowl of soylent green whilse I watch the Price Is Right in the old folks home..