The Gathering of the Clan

Greetings, and welcome back to The Chronicles of Pendragon Hold, that acre of Florida sand where nothing ever happens…..until now. Yes, I, your intrepid host THE Michael, have been on an extended sabbatical, and believe me, I had my reasons. I used to believe that there would never be a time that I could ever consider not blogging, for I have always had this deep-seated need to express myself, and having discovered such a wonderful vehicle to do so in the form of Blogger, I figured I'd be doing it forever.

Then my melancholy set in. Call it my second childhood, my mid-life crisis, or just plain old running out of things to say, but it just wasn't working for me. As you all well know, I have certain beliefs and opinions concerning politics and religion and I have never been one to be shy about expressing them. However, there is a price to pay for actually caring about what's going on in the world; it can raise your blood pressure, make you see red, and inch you just that much closer to a chemical imbalance. Also, there's the fact that we all have issues, some more private than others, that we can't or shouldn't be airing in a blog. I have maintained a certain anonymity with this blog but a lot of people nonetheless know who I am so I still have to censor myself to some degree lest I piss off people I have no desire to piss off. And, quite frankly, aside from raging against the machine, there is sometimes, if not most times, absolutely anything worth blogging about concerning life here at the Hold. So there you have it. I want to get back to blogging, I really do. I enjoy the hell out of writing and some people even suggest I do it well. I love those people. Smile…….Whatever, I will try and resume my duties here as chief cook and Harper of Tall Tales at Pendragon Hold, but please don't expect me to produce the level of award winning content you were used to consuming in the past. I have standards to maintain. Stop laughing.

So, without further adea, I invite you to share in the most amazing week this man can remember having since mankind settled on just how many days a week should last. To hear the Christians tell it, God pooped out after seven days and we've been stuck with that odd number ever since. It could be worse. It could be metric. 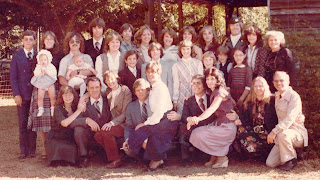 This all actually started way back in 1981 when the Patriarch of the (due to our policy here at the Hold of a smidgen of Privacy, we shall refer to the clan as "Smith") Smith Clan passed away and the family assembled for the funeral. It was the last time that yours truly experienced the full impact of this family numbers wise, and I met a few individuals who would impact me in remarkable ways. However, as families tend to do, we all went back to our separate lives and continued to live them each in their own fashion, to the point that many of us totally lost contact with the others, and it seemed we spread out to all points on the compass. I had A LOT of cousins, most of them teenagers or younger at that time, and these cousins all grew up to raise their own families, some quite large. They also engaged in their own faiths and creeds, ranging from hard core Catholics all the way to Pagans, each with their own closely held beliefs and opinions, temperaments, and lifestyles. Another words, your average American family. But we had many of us lost track of ourselves as a Clan.

Many years later and relatively recently, an Aunt I had maintained spotty contact with enabled me to make Facebook contact with two of my cousins, one in Texas and another In Taiwan, the "other" China. We became acquainted to some extent but it was hit or miss. I even had confused the one cousin, which previously I hadn't even known existed, with another cousin whom I did, for they both shared the same first names. It was confusing there for awhile to say the least. Anyway, let's fast forward to the present day.

Then my Uncle Norman died from injuries sustained in a motorcycle accident. Norman was my Aunt June's ex-husband but still the father of his children and the loss was tragic to everybody who knew him, including me. He and Aunt June were there for me many times in my life when I needed a hand up. I remembered the man quite fondly, even though it has been decades since I last saw him. However, what's really remarkable about this is what his death set off. Next thing you know, thanks to Face Book, all these cousins began to come together and discover each other thanks to this remarkable networking miracle. By spreading the word about Uncle Norm, we all began to reconnect, some having not seen each other since that day in 1981. I have very strong memories of the group as a whole but of certain individuals in particular which awoke in me a joy at the prospect of hearing from them once again. And, next thing you know………I discovered that a once bitter and neglected child buried deep inside of me, once a product of a foster home, had to be dealt with. And he was. Yes, my friends, after all these many, many years, he indeed was.

So, once the reconnections became hot and heavy between 20-something long-lost cousins, aunts and uncles, we of course started planning the big reunion. And those of us who for one reason or another were closer became even more so. Since I was an only child, I had not experienced the sensation of siblings, but several of my female cousins happily stepped in and adopted me thus. AND, as an added bonus, one of my new "Sister's" daughter has decided that I am "Uncle" Michael. I wish I could convey the emotions all of this has stirred in me. I really wish I could. I am still trying to soak it all in. So there has been many emails and chats online for months now, and I have gotten to know many of my cousins pretty well without actually having met them yet. But, still, the meeting had to happen, and that's where my voyage REALLY began……..

OK, This is going to take awhile, and both my fingers and my heart need a break. So I will spell check this and get it posted before starting on chapter two of what might encompass a whole bunch of them. This is emotional for me so bear with me. This is about love.


P.S. If you look closly at the photo, third guy from the left with the long hair holding a baby, that's me, the oldest of the cousins, holding Angie, the youngest of the cousins in my arms.